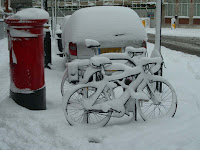 Earlier this year it was impossible to escape from the snow. Not only was it lying on the ground outside or falling from the heavens above but websites and newspapers were full of photos of the stuff which illustrated in equal measure the picturesque nature of snow, the fun millions of people had in it whilst they bunked off from work (I mean, were snowed in) and the annoyance it caused to the poor souls who got trapped in or had to abandon their cars.
Peter Zabulis took a snow-related photo of the picturesque variety. On 3rd January he uploaded the picture, of tyre tracks etched across a snow-covered field, onto Flickr and tagged it as having "all rights reserved". You can see it here.
Imagine Peter's surprise when, on 5th January he visited the Independent's website and found his photo being used in a section showing photos of snowbound Britain, without his consent. He complained to the paper and since he didn't initially get the answer he desired, he put all of the correspondence between the paper and himself on a separate Flickr page entitled "Breach of Copyright - the Independent".
The correspondence makes interesting reading. The Independent stated that it had not copied the photo. Instead, it had taken a photostream from Flickr and incorporated it into the Independent's website via an API (an application programming interface, more about these here). Effectively the Independent had provided its readers with a sophisticated link to Flickr which, rather than making the reader leave the Independent's website to view the photos, enabled readers to view the Flickr photos from the Flickr website whilst remaining on the Independent's website.
The Independent's initial reply signed off with "We did not take the photo from Flickr, nor present it as anything other than as it is shown there. I do not consider, therefore, that any copyright has been breached or any payment due". However, the matter was eventually resolved with payment being made by the Independent to Peter.
Whilst it does seem likely that the paper breached the Flickr terms of use and shouldn't have used the photo without Peter's consent, 1709 is interested to know whether any of its readers think there was an infringement of Peter's copyright. No copy was made, but had the Independent's website communicated the work to the public?
If there was no infringement of copyright it seems to 1709 that a potential loophole may exist here. The implication would be that a website could incorporate works in which copyright exists from another website via an API without permission from the copyright owner, without infringing any copyright. In some cases this may not be a problem (for example where the owner of the works is happy for them to be distributed as widely as possible), but if the "incorporating" website is generating (for example) ad revenue the "incorporated website" may have objections and may wish to enforce its rights.
1709 is especially interested in this subject because last night it was told (by a reputable source) that the three initials "API" were going to be very important in terms of Internet developments over the next few years, so one could expect issues such as this one to become more widespread.
This story was flagged to 1709 in yesterday's Guardian, in an article about the merits of the current copyright regime. You can read it here (note that the Guardian was careful not to use a copy of Peter's photo) and make your own mind up as to whether you agree with the views of the author of that piece.
One can only imagine that appropriation and use of photos which are in the public domain is a fairly common issue nowadays. In fact, the first comment this morning under the story in the Guardian is from a blogger who had his photos used (without consent) by amongst others the Daily Record. You can read more here.
ps photo is the author's own - all rights reserved!
Posted by JDK at 12:15 pm

The Independent messed up. The 'API' in question allows you to search for images offered under a variety of licenses, and The Independent must have left 'All Rights Reserved' as on open option, or they wouldn't have seen Peter's picture. So in addition to copyright infringement, they are also guilty of misuse of the Flickr API, which is a breach of the Flickr terms of use, and which could get them banned.

As you may gather, I'm on Peter's side in this case.

Disclosure: I am writing a series of articles called "Corporate Copyright Scofflaws" and will be featuring Peter's case.

Wayne aka The Mad Hatter
http://madhatter.ca

I wrote an article about the legal issues surrounding hiperlinks back in 2002 (most unfortunately for most of you, it is in Hungarian... :))

At that time, embedded (or IMG) links were not very common. It was interesting to find out that Tim Berners-Lee (the "Holy Father of Internet") himself wrote in an article in 1997: "Images, embedded objects, and background sounds and images are by default to be considered part of the document."

The question becomes very tricky nowadays, when embedding videos from video sharing sites like YouTube is a daily practice for all.

I think that most law professors believe that links themselves do not "make the work available", they only make it "more easily findable", and therefore, no copyright license is needed.

This specific case can give a different sight for many.

Hard to be sure without more understanding of the technology, but there may be an infringement of the making available under s. 20(2)(b) of the CDPA88.

My first thought would be that there IS copying involved - there always is when you look at anything on the internet (the content is copied onto your computer). By putting the photo on Flickr, the photographer has implicitly licensed the copying of his photo for the purposes of general web browsing. However, there's no reason to think he's licensed the copying of his photo for The Independent's commercial purposes. While they may not be copying it directly themselves, they are clearly causing it to be copied in a way not sanctioned by the photographer, so are infringing his copyright.(By "authorising another" to copy it for those purposes, possibly?)

But I may be way off!

I guess this is similar to the discussions and lawsuits around bittorrent - someone hosting a torrent file is likely not themselves violating copyright, since the media never passes anywhere near their own computers, but they are "inciting infringement".

Whether the author of the picture put it on flickr or pay to place it on 40 foot high advertising hoardings is irrelevant, their copyright still stands no matter how they have chosen themselves to host or present the media.

I think there was a Dutch decision this month (C More Entertainment AB v MyP2P Holding BV), holding that an embedded link does infringe copyright (http://chilp.it/65d9e8). If we have any Dutch readers it would be nice hear what was said.