Room at the Top pulled in rights dispute 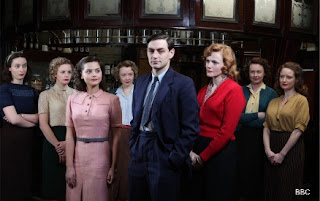 There are a number of reports accrosss the press that the BBC has been forced to pull a major adaptation of John Braine's 1950s novel Room At The Top just days before it was due to be shown on BBC4. It seems that a row has broken out over who owns the rights to the story, meaning the drama, which stars Maxine Peake and Matthew McNulty, cannot be shown. It appears that whilst the new adaptation by Amanda Coe had been approved by the widow of the author,Pat, a rival producer claims ownership of the novel's screen rights. The new A BBC spokesman said: "Transmission of Room At The Top has been postponed while we address a potential contractual issue which has emerged in the last few days." Tony Braine, the author's son, told the Daily Mail: "My mother has the rights to the book and she was looking forward to watching the drama on Thursday night" adding "We just heard that it won't be on and it's disappointing. The objection is nothing to do with the family members." The BBC have said it would not screen Room At The Top until the rights dispute was settled but do hope to show the programme at a later date.

The story centres on Joe Lampton (McNulty), an amorous Yorkshireman who ruthlessly tries to make his way to the top and the women he upsets to get there and the 1959 film version was acclaimed as a gritty 'kitchen sink' drama and won an Oscar for Simone Signoret. The 1959 film was produced by two wealthy movie-making brothers, Sir Jonathan Woolf and James Woolf. The rights were then acquired by Thames in 1970 for an ITV spin-off comedy series Man At The Top, that revolved around Lampton's amourous exploits , which itself became a spin off feature film.

The current adaptation was produced by Great Meadow Productions and BBC Wales for BBC Drama and BBC4.


http://www.google.com/hostednews/ukpress/article/ALeqM5hVFmVwsXO1Z4EZwANQXQVUYHah_A?docId=N0485631302279199832A and read more at http://www.dailymail.co.uk/tvshowbiz/article-1374564/BBC-forced-axe-Room-At-The-Top-starring-Maxine-Peake-schedule-following-rights-row.html
Posted by Ben at 8:52 am

Typically officious of the BBC to tell us what we already know - Room At The Top has been pulled fromn the schedules due to some legal dispute over rights to the book. What they ought to be telling us is when they are going to reschedule the broadcast for.