A new solution for label disputes - re-record your back catalogue! 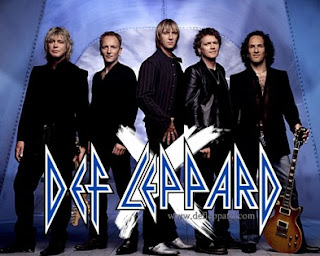 Def Leppard have announced plans to re-record their entire back catalogue because of an ongoing royalty dispute with their label of 30 years, Universal Music Group. Its more bad news for UMG who are seeking EU ad US regulatory approval to swallow up EMI's recorded music division enabling the new group to control almost 50% of the global recorded music market. Along with the ongoing claim from Eminen producers FBT over digital royalties, Def Leppard frontman Joe Elliott told Billboard that the English band were "at loggerheads" with Universal over royalty payments, especially compensation for digital downloads. "We just sent them a letter saying: 'No matter what you want, you are going to get "no" as an answer, so don't ask," adding "That's the way we've left it. We'll just replace our back catalogue with brand new, exact same versions of what we did."
Def Leppard have already recorded fresh versions of Rock of Ages and Pour Some Sugar on Me, two of their biggest hits, to coincide with the release of the film Rock of Ages  starring Tom Cruise.
Elliott admitted to Billboard that it was no easy task  to recapture the sound of decades past - the band formed in Sheffield in 1977 - saying  "You just don't go in and say: 'Hey guys, let's record it,' and it's done in three minutes … Where am I gonna find a 22-year-old voice? I had to sing myself into a certain throat shape to be able to sing that way again. It was really hard work, but we did have a good laugh over it here and there." Def Leppard also plan to record a new album and are currently touring with Poison and Lita Ford to support their live album Mirrorball as well as the newly recorded Rock of Ages and  Pour Some Sugar On Me. None of these albums are on Universal labels and they have been released digitally worldwide, and in the USA by exclusive tie up with supermarket chain Walmart. In their history the band have sold 100 million albums worldwide.
One word of caution - many bands have re-recording restrictions in their contracts with record labels which may preclude the re-recording of at least the more recent tracks in 'their' catalogue and labels may try to use these clause to prevent others to do what Def Leppard are doing - albeit with an eye on falling foul of the doctrine  'restraint of trade' in the UK.
http://www.defleppard.com/
Posted by Ben at 10:51 am

I think the first well known band to do this was Squeeze in 2010:

Does anyone know of earlier examples?

What happens when the producer is under contract to the record co, the producer had a great deal of 'creative' input into the original recording, be it the delivery of lyrics, instruments parts, the vocal sound, the audio sound etc etc and the group then try to 'forge' that sound........ who would then own the new Sound recording Right?