A Century of Dutch Copyright Law 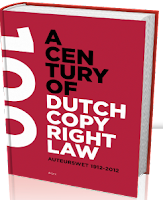 From none other than Professor Bernt Hugenholtz (Institute for Information Law: IViR, University of Amsterdam) comes news of "© 1912-2012. A Century of Dutch Copyright Law", this being a celebration of     the law we either love or hate and its impact on one of Europe's quirkiest and often most sparklingly brilliant jurisdictions: the Netherlands.  As Bernt informs us:


In 2012 the Dutch Copyright Act (‘Auteurswet’) will celebrate its centenary. The Act of 1912 is one of the world’s oldest ‘living’ acts in the author’s rights tradition. This conference will look at the characteristic elements of the Dutch Act from an international perspective. Four of the world’s most prominent experts on international and European copyright will query what the world of copyright may or may not have learned, or may yet learn, from the Dutch legislative experiment. Each presentation will be followed by a comment by a Dutch expert.

The conference will be officially opened by Dr Francis Gurry, Director-General of the World Intellectual Property Organization (WIPO). In preparation of the conference sixteen scholars on Dutch copyright have agreed to write extensive papers on distinct aspects of the Dutch Act. These papers will be collected into a book to be published by DeLex and officially launched at the conference.

Conference details here; registration here.
Posted by Jeremy at 8:18 am