Digital re-seller loses round one 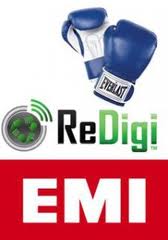 Whilst Kirtsaeng v John Wiley & Sons grabbed all the 'first sale' headlines last week, its not proved quite so useful this week. In a case brought by  CapitolRecords against digital re-seller ReDigi, U.S. District Judge Richard Sullivan in Manhattan has ruled that the  'first sale' doctrine does not apply to digital goods, in a decision which might also come as a blow to comes to other online retailers such as Amazon and Apple who have been developing platforms to re-sell used digital goods such as books, music, videos and apps.

Judge Sullivan said “The novel question presented in this action is whether a digital music file, lawfully made and purchased, may be resold by its owner through ReDigi under the first sale doctrine. The court determines that it cannot”.  The reason, the judge ruled, is because copying, or an illegal “reproduction” of a music file, must take place, despite ReDigi’s claims to the contrary.

Judge Sullivan added “Because the reproduction right is necessarily implicated when a copyrighted work is embodied in a new material object, and because digital music files must be embodied in a new material object following their transfer over the internet, the court determines that the embodiment of a digital music file on a new hard disk is a reproduction within the meaning of the Copyright Act. The judge agreed with the Capitol’s claims that the service was guilty of direct, contributory, and vicarious infringement of Capitol’s reproduction rights, and said ReDigi had no fair-use defense to the infringement as the service was not "capable of substantial non infringing use"s.

ReDigi said its customers had a right to upload their legally purchased MP3 tracks onto ReDigi’s cloud. ReDigi said that customers could 'migrate' their used files to ReDigi's service and claimed no copy of the file was made. ReDigi also said that their technology meant that the original uploaded file that was sold could no longer be accessed by the seller. The judge did not agree and was of the opinion that ReDigi’s technology cannot stop customers from file sharing or copying iTunes music purchases before they had uploaded them to the service, and ruled against the digital start up.

ReDigi, which claims to be "the world's first, real legal alternative to expensive online music retailers and to illegal file sharing" issued a statement saying it was "disappointed" with Judge Sullivan's ruling, but pointed out that the ruling only pertains to the earlier version of ReDigi's service, dubbed "ReDigi 1.0."  explaining that the new 2.0 version is based on different, patent-pending technology, adding "ReDigi will continue to keep its ReDigi 2.0 service running and will appeal the ReDigi 1.0 decision, while supporting the fundamental rights of lawful digital consumers".

Capitol is expected to seek both damages and an injunction to force ReDigi to cease operating its resale website.

Cases like this one, 'Meltwater III' and Aereo's recent victory (also within the |Second Circuit) are really stretching the current law's ability to accommodate digital technology within statutes which were fundamentally drafted before the internet was born. That means judges are making a lot of law on the hoof.
That is not to criticise Judge Sullivan in this case. It is hard to fault his analysis, even if the outcome appears perverse to many who think they own their digital downloads, when in fact they merely have licences to use them under strictly constrained conditions.

"What's more, if your file has already been uploaded by someone else – a digital copy of a Radiohead album, for instance – then Dropbox will just link you to the existing files rather than waste bandwidth and space by uploading a duplicate. Are those files uploaded by that other person now yours? Surely not. Untangling relationships with your possessions in the cloud quickly gets confusing. "It's a muddle of abstractions," says Richard Harper at Microsoft Research in Cambridge, UK.

This is causing tension between our intuitive beliefs about property and the reality that this technology has created. How can we resolve this? ..."
http://www.newscientist.com/article/mg21729101.900-lost-in-the-cloud-how-safe-are-your-online-possessions.html

Something else that is often overlooked is that the process that in a computer turns very long strings of code into a picture or music intrinsically requires making 'new' copies.

I just spotted another new business model - 1DollarScan is an unusual business venture that allows anyone to send the company a physical book and they will scan it and send the customer a high resolution PDF for $1— but the physical book will be destroyed and recycled in the process. The Authors guild takes a dim view referring t the service as infringing copyrights.