Harris Faulkner, a Fox News anchor, is suing toy company Hasbro, for false endorsement, unfair competition, and violation of her right to publicity, claiming that Hasbro used her likeness without authorization to create a “Harris Faulkner” toy hamster, which is part since 2014 of Hasbro’s “Littlest Pet Shop” line. The case is Harris Faulkner v. Hasbro, 2:15-cv-06518.
The complaint details two decades of Plaintiff’s experience and notes that Plaintiff does not endorse any products, as this “would be a breach of journalistic ethics, would directly harm her professional credibility, and would be in violation of her contractual obligations to her employer.” 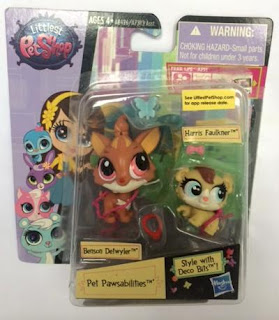 The fact that this toy is manufactured and sold by Hasbro “is extremely concerning and distressing to [Plaintiff].” The toy is labeled a choking hazard, and this made Plaintiff “extremely distressed [as] her name has been wrongly associated with a plastic toy that is a known choking hazard that risks harming small children.” Also, “Hasbro’s portrayal of Faulkner as a rodent is demeaning and insulting.”Since this is back-to-school season, perhaps this could be a useful line for parents asked to shelter their kid’s class gerbil for the weekend: rodents are bad, not cute, little Timmy, say bye bye to gerby!
New Jersey Recognizes a Common Law Right to Publicity
New Jersey does not have a right of publicity statute, but has a common law right of publicity. The complaint does not cite any case law, nor does it go into the details of what are the elements of a common law right of publicity claim in New Jersey, so I did some research. New Jersey recognizes a right to publicity since 1907, date of the Edison v. Edison Polyform Mfg. Co. case, where Thomas Edison successfully claimed that defendant could not use “Edison Polyform” as the name of a painkiller he manufactured, even though he had bought the painkiller formula created by Thomas Edison himself. However, Defendant had not followed exactly the original formula, and also had used Thomas Edison image in its advertising, thus creating  the false impression that the famous inventor had endorsed the product.
Under this case law, Plaintiff in our case could claim that Hasbro used her name without authorization. However, she would need to prove that plaintiff meant to use HER name, not a generic HARRIS FAULKNER name. The complaint claims that Plaintiff is “uniquely named” but Faulkner is, after all, also the name of a famous writer, and Harris is still a pretty common name, albeit not for a woman. I must confess that I did not know Plaintiff’s name until today, and believe that she is mostly known by regular Fox News viewers and by television and media buffs.
Defendant would have to explain to the court why it chose this particular name for its toy. If, say, the Hasbro main designer is named Joe Harris, and he wrote his MA thesis on “Hamsters in the Works of William Faulkner,” this may get the attention of the judge.
But imitating a person is also considered to be a right of publicity violation in New Jersey, as recognized by the District Court of New Jersey in 1981 in the Estate of Presley v. Russen case, and so, in our case, Plaintiff could argue that the toy imitates her, if she can convince the court that the toy bears at least some resemblance to her.
Is there a physical resemblance between the anchor and the toy?


The complaint states that the toy “bear[s] a physical resemblance to [Plaintiff]’s traditional professional appearance, in particular the tone of its complexion, the shape of its eyes, and the design of its eye makeup.”
I would be hard-pressed to find much physical resemblance, if any, between Plaintiff and her eponymous toy, which arguably resembles Kimba, Bambi, and other big round- eyed kawaii toys (see here or here), and also resembles human-like manga characters. Granted, I studied law, not zoology, but this toy does not even look like a rodent. The plastic creature on the right looks like Simba with a comb-over, and the one on the left looks like a cat with a bad case of pink-eye. So, I would say there is no physical likeness between the anchor and the toy. What do you think?
Calculating Damages in Right of Publicity Cases
Plaintiff is asking the court to award her $5,000,000 in damages, which include actual damages and profit earned from the use of her name, likeness, identity or persona. I recently found this not- so-recent (2008) but interesting article on how to calculate damages in right of publicity cases. Its author, Lawrence E. Heller, notes that “[d]etermining which methodology a plaintiff can effectively use to meet the burden of proving that the defendant’s profits are attributable to the unauthorized use of the plaintiff’s image can be problematic” and offers some clues, among them a “trailer test”, where consumers are asked to spend poker chips on products bearing Plaintiff’s images and on others which do not. This is a rather interesting method, but could be quite costly. Other methods are also described.
Hasbro will probably move to dismiss. I will keep you posted.

Posted by Marie-Andree Weiss at 7:59 pm

"a breach of journalistic ethics, would directly harm her professional credibility"

And she works for Fox News??