Anish Kapoor’s sculpture, “Dirty Corner,” which was installed last June in the gardens of the Palais de Versailles, has been vandalized again. It had already been vandalized in June
, when it was defaced by yellow paint. 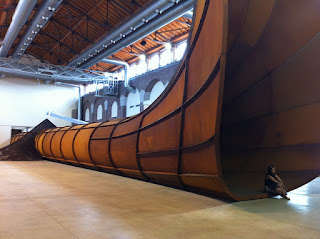 This time, the long cone of steel, which the artist has presented in an interview as representing Queen Marie-Antoinette’s vagina, and the rocks surrounding it, have been covered by hateful and anti-Semitic phrases painted in white, such as: "La reine sacrifiée, deux fois outragée", "SS Sacrifice Sanglant", "Le deuxième VIOL de la Nation par l'activisme JUIF DEVIANT", "Le Christ est roi à Versailles" [“The sacrificed queen, twice outraged, " “Bloody SS Sacrifice", "The Second Rape of the Nation by JEWISH DEVIANT activism, " "Christ is king at Versailles."]
Anish Kapoor has decided the offensive inscriptions will not be deleted, as it would not erase the fact that such vandalism took place. He wrote on his Instagram account:
“The vandalised sculpture now looks like a graveyard, the stones are now gravestones marking the ruinous politics of fundamentalist bigotry. Dirty Corner allows this dirty politics to expose itself fully, in full view for all to see.”
He also wrote on his own web site:
“As the artist I have -for the second time- to ask myself what this act of violence means to my work. The sculpture will now carry the scars of this renewed attack. I will not allow this act of violence and intolerance to be erased. Dirty Corner will now be marked with hate and I will preserve these scars as a memory of this painful history. I am determined that Art will triumph.”
The artist had already written on his site, after the June attack:
“Should the paint that has been thrown all over the sculpture be removed? Or should the paint remain and be part of the work? Does the political violence of the vandalism make Dirty Corner “dirtier”? Does this dirty political act reflect the dirty politics of exclusion, marginalisation, elitism, racism, Islamophobia etc. The question I ask of myself is: can I the artist transform this crass act of political vandalism and violence into a public creative aesthetic act? Would this not then be the best revenge?”
Both of these statements are well worth being read in full.

Under French law, such vandalism is a crime, punishable by two years in jail and a 30 000 fine, and is also a tort. These tags also violated the integrity of the work, and thus violated Amish Kapoor’s moral rights over the sculpture, as protected by article L. 121-1 of the French Intellectual Property Code, under which the author has the perpetual right to respect for his work.
Also, tagging anti-Semitic messages is a crime, as, under article 32 of the French Press law, religious defamation is a crime punishable by one year in jail and a 45 000 Euros fine. However, the artist’s decision not to delete these messages is not itself illegal, even though it perpetrates an illegal publication. Anish Kapoor , by stating that that the heinous messages must continue to be seen,  does not condone them, but wants the public to be able to see the face of hate, and thus to “transform this crass act of political vandalism and violence into a public creative aesthetic act.” As such, one can argue that tags have now become an integral part of the work, while its original significance has shifted, and that the artist has made a sovereign decision which must be respected lest to tramp over his moral right.
This decision, however, has not been met with unanimous approval. Jonathan Jones urged the artist to reconsider, arguing that “[h]e is giving bigots the oxygen of publicity and letting them ruin a beautiful work of art.” U.S. law considers generally that the answer to hate speech is more speech. Justice Holmes famously wrote in 1919 in his dissent in Abrams v. United States, in which Justice Brandeis concurred, that the best test of truth is the power of the thought to get itself accepted in the competition of the market” and in 1974, Justice Powell wrote in Gertz v. Robert Welch, that “[u]nder the First Amendment there is no such thing as a false idea. However pernicious an opinion may seem, we depend for its correction not on the conscience of judges and juries but on the competition of other ideas.”


Dirty Corner will be shown in the Versailles garden until November 1, as originally planned. Let’s hope that, at this time, the perpetrators of this crime will have been arrested.

UPDATE: A French elected official from Versailles has just filed a complaint against Anish Kappor and Catherine Pégard, President of the Château de Versailles, for racial defamation, and public insults.


Image of Dirty Corner (not in Versailles though) is courtesy of Flickr user Silvia Sfligiotti under a CC BY-NC-SA 2.0 license.
Posted by Marie-Andree Weiss at 9:30 pm


Kapoor denies having described the sculpture as representing Marie-Antoinette's vagina, as a search of UK news media will easily demonstrate.

I would recommend to anyone his interview on BBC Radio 4's today programme this morning at http://www.bbc.co.uk/programmes/p031x54n

Thank you for the link John. Amish Kapoor is on record in the French press, and I am not sure if he later changed his mind, or was misquoted by almost all the major French newspapers.