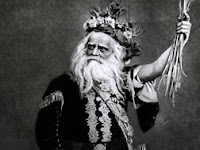 A press release issued by the World Intellectual Property Organization (WIPO) today sounds mildly encouraging for those unrecognised labourers who strut and fret their hour upon the stage and who were formerly heard no more, till mechanical reproduction and cinematography were invented, that is: actors and musicians. The press release goes as follows:

"WIPO Partners with Actors and Musicians to Boost Performers’ Rights

The World Intellectual Property Organization (WIPO) signed on September 23 an agreement with the International Federation of Musicians (FIM) and the International Federation of Actors (FIA) [if it's FIM and FIA, not IFM and IFA, you can be sure the civil lawyers of continental Europe have been busy ...] to support efforts to improve recognition of the significant contributions [The Department of Ambiguity asks whether 'significant' limits the totality of contributions, or suggests that they are significant by virtue of the fact they are contributions] made by actors and musicians around the world [and not elsewhere?].

The agreement highlights the connection between IP and labor ["IP is a legal weapon with a worker at both ends of it"] and the special concerns of cultural workers from the viewpoint of development and cultural diversity [does this mean anything to anyone other than the person who wrote it?]. It provides for the organization of joint activities to strengthen performers’ networks and improve their economic and legal status [well, that can't be bad], as well as for raising awareness of the need to support performers. Actors and musicians are an essential element in the development of the creative potential of all economies, particularly in developing countries [Cf doctors, accountants, lawyers, night-club bouncers, career politicians and diplomats? Depends what you mean by 'essential']. It is further anticipated that the agreement will help to galvanize support for the protection of performers at international level [galvanize, initially, is to provide a superficial external surface to cover the substance that lies beneath ...].

Treaty negotiations on the protection of audiovisual performances were deadlocked in December 2000 because of a lack of agreement on the issue of transfer of rights from the performer to the producer [Some would churlishly argue that it is the producer who is "an essential element in the development of the creative potential of all economies", but this is not the place to raise this issue]. Since that time, WIPO has undertaken extensive international consultations to develop information materials on outstanding differences and to improve the flow of information and understanding of the situation of performers [It's good that information materials are being gathered: it's a tedious task but, in the long run, decisions based on fact are likely to be sound than those based on fashionable sentiment, political preference or economic dogma]. Recent consultations among Member States, held in Geneva, allowed for an open debate on this issue, which remains under consideration of the WIPO General Assembly.

FIA and FIM gather, respectively, unions of musicians and actors from all regions in the world. Together they represent hundreds of thousands of professional performers working both in the sound and audiovisual industry [They do indeed, and their task is hard. As much as they toil to better the plight of their members, technology persists in evolving in ways that make it easy to lose any gains they achieve in policy or legal terms]".