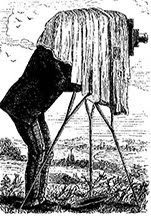 Travelling last week, I missed the self-inflicted news (reported here by the Guardian) that more than 30 photographers held a protest outside that newspaper's central London offices. The photographers were objecting to the decision of the paper to amend its standard terms for commissioned photography by giving itself the right to free re-use of commissioned pictures. Some 850 photojournalists have signed a petition against the move, according to the National Union of Journalists.

"Comment may be free, but content is not free. This move is theft of people's work and their right to make a living from it"

-- a statement which will no doubt upset many legal purists by equating the re-use by a party commissioning the taking of a photo with 'theft'. A Guardian spokeswoman is then quoted as saying:

"This change has been introduced at a time when we are cutting back on a wide range of expenditure to ensure [the Guardian Newspaper Group] has a sustainable cost base for the future and is therefore able to continue to continue to invest in photojournalism. It means that we can reuse a photo that we paid to have taken, from 1 September, without paying the photographer again. Photographers retain copyright, and after a 60-day exclusivity period, the photographer is free to resell the picture. Our terms and conditions for freelance photographers remain among the best in the industry."

In the old, pre-digital days this would have generated witty comments about one or other side in the dispute having a 'negative' attitude -- but who remembers the old negatives or the mysteries of the dark room in this day and age?
Posted by Jeremy at 1:10 pm

The Guardian could also choose to source its photos from those already available on the web under CC (or other open) licenses. Then what would these photographers do?