When the rabbis dance ... 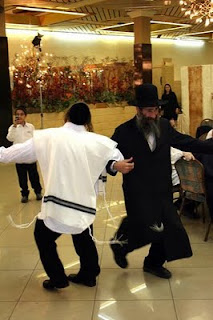 While this weblog normally avoids religious issues, this one is too good to 'pass over'. Two of Israel's most prominent rabbis, HaRav Yosef Sholom Eliyashiv and HaRav Ovadiya Yosef, have ruled that wedding hall owners in that country's religious communities must pay copyright royalties as required by law. Those who fail to do so, say the rabbis, are transgressing the laws of 'gezel' (this word, often translated as 'theft', is a substantially wider concept).

Despite copyright laws, hall owners in the orthodox sector have refused to pay ACUM –- the local collecting society for musicians and other copyright holders -– claiming there is no ruling under Jewish law which requires them to pay to play music at events such as weddings.

While HaRav Eliyashiv and HaRav Yosef agree as to the end to be achieved, they disagree with regard to the reasoning by which their conclusion is reached. According to HaRav Eliyashiv,

"Since the hall owner receives a licence to open the facility he is obligated to adhere to all legal requirements, and if the law requires [paying royalties], he has to meet that obligation. If not his licence is not a licence".

HaRav Yosef responded to the question from a different angle, applying the principle of Dina d’malchuta dina (the statute law of a secular state becomes part of Jewish law if it does not contradict any of the latter's fundamental principles).
Posted by Jeremy at 4:26 am