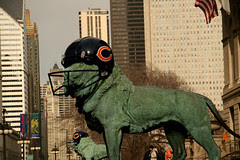 Da Bears.  Perhaps one of the most famous phrases in 1980s American football.  The Chicago Bears had a lot of cultural staples that decade, Mike Ditka, Refrigerator Perry and the 1985 Superbowl Shuffle (video available here).  But as the 25th anniversary of the Superbowl Shuffle approaches, there’s trouble in the Windy City.

Photo credit: “It’s Like Making a Trip
to Mecca if You’re a Bears Fan”
CC-BY-SA Senor Codo
Julia Meyer, owner of the copyrights to the video and song Superbowl Shuffle has brought suit against cable network Viacom, owner of MTV and VH1.  Meyer alleges copyright infringement under the US Copyright Act, misrepresentation under the Lanham Act, deceptive trade practices under Illinois state law and unjust enrichment.  (Full brief pdf)
What did Viacom do?  It played the Superbowl Shuffle video on MTV and VH1, not the whole video, but clips of it.  The shortest clip, 16 seconds, the longest, a minute and a half.
According to Meyer,

Meyer’s claims that by airing the Superbowl Shuffle clips on MTV and VH1, Viacom’s actions were “willful and deliberate, and in utter disregard for Meyer’s rights.”
All I can do here is speculate.  Once upon a time, MTV and VH1 actually played music videos, full music videos, all of the time.  That suggests that the Networks are familiar with the standard process for licensing videos and would not have aired the videos without going through that standard process.  (Unfortunately, I am not familiar with the standard process and have no idea if there is any sort of set compulsory licensing in place for music videos or if each video’s airing must be negotiated with the rightsholder.)
On the other hand, most of the videos MTV and VH1 show are produced and owned by major record labels.  This video is different.  It is not owned by a label, but by a entrepreneur who licenses the video via a company in Illinois.  Did Viacom try to take advantage of this situation by airing the video without going through the normal licensing practice?  The brief filed by Meyers gives us no information about any relevant background facts in this area.

The claims under the Lanham Act and Illinois State Law (815 ILCS 510/2) are similar.  Meyer and co-plaintiff Renaissance Marketing Corporation alleges that by showing clips of the Superbowl Shuffle on VH1’s program One Hit Wonders and MTV’s MTV News, Viacom engaged in “unfair and deceptive trade practices in that it likely caused confusion and mistake by the public.”
At first, this sounds pretty ridiculous.  How would the public confuse a football team with some cable channels?  Would the public really think that the airing of the videos means the Chicago Bears are endorsing VH1 and MTV?  But the alleged confusion isn’t over affiliation or endorsement.  Meyer’s claim is that the public will be mislead into believing that she authorized the use of the video on the programs.
It’s possible viewers believe the owners of videos approve the playing of their videos.  But I wonder how realistic it is that the public would believe that for the video uses at issue here.  The MTV clip was part of a news show including interviews with members of the 1985 Chicago Bears team.  Does the public assume permission is granted whenever a very brief (40 seconds in this case) clip appears on the news as part of a story?  And the real question, would the public assume permission is given by the video owners for videos that appear on VH1’s One Hit Wonders?  Being known as a one-hit-wonder isn’t usually a good thing.  The public might assume that if specific permission were needed, there wouldn’t be any videos on the show.
The deceptive practices and likelihood of confusion claims are plausible but tenuous at best.  My guess is the case settles; I’ll be surprised if it goes to trial.
Posted by Afro Ng'ombe at 3:14 pm