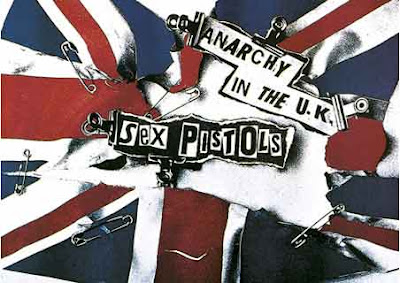 The ramifications of Mrs Justice Proudman’s decision in Meltwater continue to niggle away in my mind and I noticed that the London Metro’s headline yesterday (pub: Associated Newspapers) was “Anarchy in the UK”, the title of the infamous sound recording and song, written by Messrs Paul Cook, Steve Jones, John Lydon and Glen Matlock in 1976. The recorded song formed the A side of the Sex Pistol’s debut vinyl release in the UK. Now IF copyright can subsist in a headline and a headline can be an independent literary work ....... and Meltwater tells us it can, then what if that headline itself is copied – here from a song title? Surely the logical conclusion is that the owners of the ‘title’ of song should have the right to protect their work in turn, independently of the lyrics of that the song ...... if it is worth copying, isn’t it worth protecting?

I also noticed the news that 60 artists including Mr Hudson, Guillemots, UNKLE, The Big Pink, The Kooks, Enter Shikari, Coldcut, Orbital, Heaven 17, Jon McClure, Suggs, Gallows and Pendulum have recorded two versions if John Cage’s famous ‘silent’ composition, '4'33"', as part of the Cage Against The Machine project. Billy Bragg and Imogen heap even "rang in" their contributions from mobiles! The news reminded me of a bizarre copyright story from 2002 involving the same work. The composition 4' 33", is credited to avant garde musician and songwriter John Cage (1912-1992) and described thus “For tacet (any instrument or combination of instruments). 4'33'. 20th Century. Performance notes. Composed 1952. 2 pages. Duration 4 minutes and 33 seconds. Published by Edition Peters (PE.P06777). ISBN M-3007-4483-4. With performance notes. 20th Century ...... silent piece for any combination of instruments”. You can purchase the sheet music for the princely sum of $5.95 here http://www.sheetmusicplus.com/title/4-33/1008430.

In July 2002 British composer and recording artist Mike Batt (of ‘The Wombles’ fame) found himself the subject of a threat of copyright infringement action for including the recording "A One Minute Silence," on an album for his classical rock band The Planets. He was accused of copying the song it from the work by Cage. Remarkably Batt settled the matter out of court with the BBC reporting that Batt paid an undisclosed six-figure sum to the John Cage Trust, telling the Press Association at the time: "This has been, albeit a gentlemanly dispute, a most serious matter and I am pleased that Cage's publishers have finally been persuaded that their case was, to say the least, optimistic” adding "We are, however, making this gesture of a payment to the John Cage Trust in recognition of my own personal respect for John Cage and in recognition of his brave and sometimes outrageous approach to artistic experimentation in music." Batt credited "A One Minute Silence" to "Batt/Cage". At the time lawyer Duncan Lamont told BBC Radio 4’s Front Row the question was "Is it a work?" saying "Has it been written down, is it a literary, artistic or dramatic work? The argument will be there is no work because there are no notes." A good a starting point as any, but I wondered if 1709 Blog readers had any illuminating thoughts they might care to share on this case - or indeed on my “anarchy” musings?

Charles Swan (Swan Turton) had the same musings - and emailed me. Charles has written an interesting piece in the context of advertising slogans. You can see his bulletin on the subject here: http://www.swanturton.com/ebulletins/archive/CopyrightInAdvertisingSlogans.aspx
Posted by Ben at 9:14 am

the 'silence' copyright will forever cause debate among copyright lawyers and academics, and music fans. Here's what comes to mind after reading your post

1. It could be argued that 'silence' is a musical work, based on the fact that it takes notes and rests to create music, and 'silence' can be construed as a long rest, or at a push - a series of musical rests

2. Is 'silence' a sound recording? The question that need answering is if sound is just confined to the frequencies audible by humans - 20hz-20khz - if not, then how do we know that a filter was not put through the recording process to allow frequencies outside the stated range unto the tape?

3. Whilst Cage may have a valid copyright for his 'silence' composition, I doubt if that gives him a monopoly on silent compositions. Did John Lennon not record his 2 minute version, without any comeback from cage, who was then alive? I think where Batt came a cropper was providing Cage with a co-writer credit. That seems like a recognition that Batt's was either a homage or interpolation of cage's work, for which cage's contribution deserve payment

The silence question is an interesting one.

I can't help thinking that this may be a case where the public benefit in permitting (or even encouraging) widespread infringement of Cage's work ought perhaps to be allowed to outweigh the artist's right to exclusivity over his work.

As a starting point, perhaps I could suggest an extended choral arrangement by the passengers of the 18:32 Clacton-on-Sea service...

The other day I bought book in WHSmith entitled "A4 Refill Ruled". It turned out to be a much more extensive work than John Cage's 4.33 because it contained 100 pages with ruled lines approximately 1cm apart. It is an outstanding literary work. But I have noted that it has already been copied by a number of other stationers including Partners, albeit under a different title. However the basic format of these other works clearly infringes the copyright in WHSmith's original work. They didn't even have the sense to use different coloured paper (I suggest yellow). I shall watch the court listings with eager anticipation and hope they don't settle before trial.