Japan Moving Towards Fair Use? 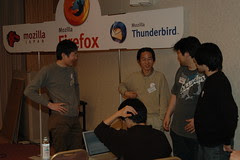 According to an article on Japan Today, an advisory panel in the Japanese government has approved “a plan to tolerate the unlicensed use of copyright works.”

Under the panel’s suggestion, copyrighted works caught in the background of a film or picture will not need to be licensed.  Photo credit: Japan Firefox DevCon 2006_4209 CC-BY-NC-ND Gen Kanai available at Flickr.

This tolerating attitude only applies to certain unlicensed uses and appears similar to fair use and fair dealing concepts.  Currently, the allowed uses are much more vague than a specific fair dealing list, and even a bit more obtuse than the US’s four-factor fair use test.  So far, the Japanese allowed uses seem to focus on the nature of the use:

“use of a copyrighted work may be tolerated if the use itself is not the main purpose and the dependence on it is light, if the use is minor and reasonably required in the course of a legal use, or if the use is not aimed at seeing or hearing copyrighted expressions.”

Commenter Mr. Dog - who has invested a lot of energy into explaining the difference between copyright and trademarks, patents and what-you-think-IP-is in the comment section – noted that a fair use type of protection would bring Japan more in line with the rest of the world.

This plan may see draft legislation as early as next month.

It's more like a 'de minimis'-clause rather than a 'fair use' kind of exception isn't it?