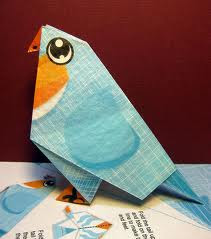 Six origami artists from around the globe are bringing a US legal action against artist Sarah Morris, accusing her of using their works in her own. The origami artist's lawsuit says that some of Morris's collection of 37 abstract works simply titled 'Origami' are nothing more than coloured in versions of their own intricate works of folded paper which feature humming birds, grasshoppers, beetles and other creatures. The lawsuit, filed in California by the six artists whose home countries include Spain, Italy, Japan and the USA, says that in 24 of Morris's works, she copied the original origami crease patterns, changed the colour schemes and then exhibited the works without permission from the original creators of the patterns and designs, saying that the new works by Morris are "strikingly similar to copyrighted artworks". In an interview on her gallery's website she says that "for me, origami is a sign of change. It is always used ... like a harbinger of change. And what the change is depends on your projection of change. You know its an open structure and. Its like an open vessel". Morris had reportedly said that she had based the Origami series on "found origiami designs" and "traditional patterns". It is reported that Morris's lawyer, Donn Zaretsky, told Art Newspaper the case was "completely without merit and we look forward to defending the matter in court. Its hard to think of a clearer use of transformative fair use".

More at http://www.guardian.co.uk/artanddesign/2011/jun/05/tate-artist-sarah-martin-origami-lawsuit
Posted by Ben at 7:47 am