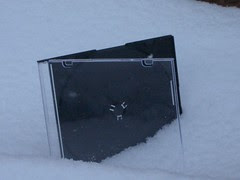 Over one thousand burned DVDs, a small shop in Orlando, Florida, and the county Economic Crimes Unit, a combination that has “uh-oh” written all over it.

The shop owner tried to claim that what he was doing was legal because he wasn’t selling the DVDs.  He was giving the DVDs away for free, for promotional use only, with the purchase of a $5 empty jewel case.

The newspaper reporting the results of the search warrant execution states that Mr. DVD-seller is facing felony charges under state law. However, the Florida statute that appears to be most applicable, 540.11, doesn’t seem to quite address the facts at issue here. The first two subsections making it unlawful to copy and sell DVDs only applies to sound recordings fixed prior to February 15th, 1972.  The next two provisions make it illegal to copy “performances.” There’s no definition of “performance” in the statute, so it’s unclear whether movies would fall under this provision.

If movies do count as performances, then Mr. DVD-seller is in trouble. Section (2)(a)3. makes it illegal to copy articles embodying performances with the intent to use those articles to cause the sale of other articles. Hmm… now why would someone pay $5 for an empty jewel case when a pack of 10 retails for nearly half that price on amazon.com?

A Florida case involving infringing CDs, rather than DVDs, suggests section (3)(a)1. might be applicable here.  In that case, it was clear that the CDs themselves were for sale.  If the court doesn’t allow the “I’m only selling the jewel cases” line to fly, then this provision could possibly be applicable.  The real tricky thing here is that half of the provisions talk about sound recordings and half talk about performances. Neither term is defined and neither obviously covers movies.

But don’t worry.  Even if Mr. DVD-seller manages to slip through the cracks of Florida’s state laws, he’s still in deep trouble under Section 506 of the US Copyright Act.

The Orlando police were alerted about Mr. DVD-seller by the MPAA.  Maybe he shouldn’t have set up his shop in a town owned by Disney.