A Motion for Fair Use 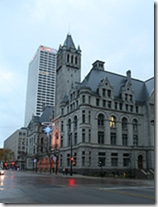 The courthouse for the United States District Court, Eastern District of Wisconsin* is majestic, beautiful, dignified. The 100-year old structure’s granite tower draws eyes upward, past elegantly arched windows and into the clear blue sky.  Marble and ornately carved wood add an air of grandness to the sedate black-robed men and women who spend their days in the building’s courtrooms and chambers.  Sunlight pours into the entrance-way atrium from a glass sky-light high above.  It’s a peaceful place, where footsteps echo down from long open balconies and sophisticated women in well-pressed skirts dart in and out of doors.

But this month, one Federal Judge in Wisconsin had to deal with something far less dignified than his magnificent surroundings.  As Judge Stadtmueller’s opening line explained, “Federal lawsuits seldom touch on such riveting subjects and regard so many colorful parties as the present matter.”  The present matter: a copyright dispute over a song called “What What (In the Butt).”

This is one case where no summary could be as entertaining as the actual judicial opinion, and so it will give the basic copyright issues. You can read the full Brownmark Films, LLC v. Comedy Partners decision for yourself.

Brownmark Films made a ridiculous music video that was a smash hit on YouTube.  South Park (Comedy Partners) featured its own 58-second version of the song, performed by a character named Butters Stotch.  Brownmark brought an action for violation of the US Copyright Act (Section 101) against Comedy Partners.  Comedy Partners filed a motion to dismiss on the grounds that Brownmark’s suit failed to state a claim on which relief could be granted.  (A 12b(6) motion for the Fed Civ Pro junkies out there.)

Comedy Partners made 2 arguments in its defense: 1) Brownmark lacked standing to bring a federal copyright suit, 2) the use on South Park was permissible under the doctrine of fair use.

In order for a US copyright holder to sue for infringement in a federal court, the work involved must be registered with the US Copyright Office.  And, the person bringing the suit has to have exclusive rights to the work.  The song at issue here was registered and two of the joint authors properly transferred their rights to Brownmark such that he had exclusive rights.  In discussing this issue, the court recognized a circuit split between the 9th and 7th Circuits on whether joint copyright owners can grant an exclusive license.  The court sided with the 7th Circuit, saying joint owners can grant exclusive licenses.  This is probably a good thing since the Eastern District of Wisconsin is in the 7th Circuit.  The court goes on to comment further on a wider rejection of the 9th Circuit’s perspective, noting that it “has been widely lampooned in several respected treatises.”

Factor 1: purpose and character of the use – “to lampoon the recent craze in our society of watching video clips on the internet that are — to be kind — of rather low artistic sophistication and quality.“  The work is transformed by replacing the original performers with a South Park character, and commentary is made on the value of viral videos.  [Tell that to Justin Bieber.]  In favor of Comedy Partners.

Factor 2: nature of the work – “the "nature" of the copyright in question does not help this court assess whether South Park's parody is a fair use.”  Factor ducked.  In favor of, neither side?

Factor 3:amount and substantiality of the portion of the work used – “the use of the copyrighted work in the South Park episode was relatively insubstantial.”  Only a small amount of the song’s lyrics were used.  In favor of Comedy Partners.

Factor 4:effect of the use on the work’s potential market – “there is little risk that derivative work in question would somehow usurp the market demand for the original.”  In favor of Comedy Partners.

The result: dismissal of the suit, with prejudice.

There are some very interesting nuggets hiding in this apparently standard fair use analysis.  The court notes that normally, to bring in materials from outside of the complaint, i.e. the two video clips at issue here, the court needs a motion for summary judgment rather than a motion to dismiss.  The difference is that in summary judgment, the court is making a decision to a valid legal dispute with the facts given in the pleadings.  In a motion to dismiss, the court is deciding whether or not there is a valid legal dispute to judge.

When necessary, a motion to dismiss can be transformed into a motion for summary judgment.  But here, the court points out an exception, “where the material in question is expressly referenced in the complaint and is central to the plaintiff's claim,” and continues to make a decision on whether or not there is a valid legal dispute here.

The Court acknowledges another problem to proceeding with a fair use analysis on a motion to dismiss.  Fair use is generally regarded as an affirmative defense to infringement.  Don’t you need a valid dispute, a valid claim, before there can be a defense to it?  Normally, yes.  But here again, the court finds an exception.  If the plaintiffs prove the defense in their own pleadings, then the court can proceed under the motion to dismiss.  And that’s what the court found here.

The court says that this practice is common place.  If that is so, why keep viewing fair use as an affirmative defense instead of as not infringement?  Seems like it would require less legal gymnastics.

Picture credit:Milwaukee Federal Building cc-by compujeremy available at http://www.flickr.com/photos/compujeramey/2041317259/. The photo was cropped for the blog.

* More information about the Milwaukee Federal Building here.  The author spent a splendid 6 weeks exploring the building as an intern.
For our European friends, don’t forget the old quip, “America, where 100 years is a long time and 100 miles is a short distance.”

The amazing irony or poetic justice of the decision is contained in the Court's description of the plot of the allegedly infringing video clip:
" In the episode, Butters' video, much like the original WWITB video, goes "viral," with millions watching the clip. However, after their attempts to collect "internet money" prove fruitless, the South Park fourth graders learn that their video, much like other inane viral YouTube clips, have very little value to those who create the work."