Down Down, Deeper and Down. 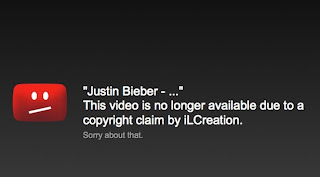 What do Justin Bieber, Rhianna, Lady Gaga , Beyonce and Shakira have in common? Well you can make your own minds up about their music, but they are undoubtedly some of the biggest pop stars on the global music jukebox at the moment – and NONE of them are signed to iLCreation. Why do I mention iLCreation – well this entity managed to get videos by Bieber, Gaga, Shakira, Rhianna, Beyonce and others including Bruno Mars and Miley Cyrus taken down from YouTube. Seemingly rather easily.

Many of the artistes who whose videos were targeted had performed at the 2011 MTV Video Music Awards last Sunday (where Beyonce announced her pregnancy to the World)and according to Webpronews an unknown individual using the name iLCreation submitted a copyright claim on numerous videos including Miley Cyrus’ “Party In The USA”, Rhianna’s “What’s My Name” and. Lady Gaga’s “Bad Romance” and following its standard procedures, YouTube pulled down the video including Bieber’s entire Vevo channel, it seems without requiring any form of verification that the claimant had the right to request the take-down.

Vevo initially posted a statement that explained, “Someone is making false copyright claims against the Justin Bieber and Lady Gaga channels and YouTube has blocked access to the videos as a result. We are working with YouTube to resolve ASAP.” The videos could still be seen on Vevo’s own site. Vevo, part owned by major record labels Sony and Universal, issued a formal statement that read, “A few videos by Justin Bieber and Lady Gaga were briefly taken down by YouTube as a result of false copyright claims. This issue has been resolved.” Almost all of the video affected by the fake notices were restored within a couple of hours. As one commentator added “It’s particularly ironic for Bieber…. seeing as how Youtube is where he started”

Shakira's "Waka Waka" has had 390 million viewers on YouTube. iLCreation is now the most “hated person on Twitter”. Allegedly.


http://www.webpronews.com/justin-bieber-lady-gaga-videos-pulled-from-youtube-2011-08
Posted by Ben at 8:25 am