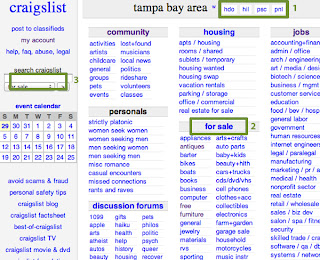 Craigslist is the global classified advertisements website with sections devoted to jobs, housing, personals, for sale, items wanted, services, community, gigs, résumés, and discussion forums which began in the USA in 1995 when Craig Newmark started an email distribution list of friends, featuring local events in the San Francisco Bay Area, before becoming a web-based service in 1996 and expanding into other classified categories. It started expanding to other U.S. cities in 2000, and currently covers 50 countries with a search engine, discussion forums, flagging system, self-posting process, homepage design, personals categories and 'best-of-Craigslist' feature. Over 100 million classified ads run on its site each month.   Now let’s be clear – postings are usually user generated and the only moderated content was for the now defunct US ‘adult’ section.

So what’s the fuss? Well, back in 2012 mashup sites such as padmapper.com and housingmaps.com began overlaying Craigslist data with additional data such as Google Maps, and adding their own search filters to improve usability. PadMapper took real estate listings and added ‘value’ to them, taking a series of data points such as the  cost of apartment, location, size and then allowed the customer to search on that basis. And when the customer found what they wanted, they would then be directed back to Craigslist to read the full posting and complete the transaction .

Despite what might be considered a ‘win win’ situation, Craigslist were not best pleased, and In June 2012, Craigslist changed its terms of service to disallow the practice. In July 2012, Craigslist filed a lawsuit against padmapper.com along and 3taps, who ‘scraped’ the data from Craigslist, and a third defendant, Lovely. The claim was twofold: A copyright claim and then claims relating to the  violation of the Craigslist terms of service (ToS) and further claims under the Computer Fraud & Abuse Act (CFAA): Craigslist’s ToS do allow for websites like Google and Bing to “scrape” and index their website, but do not allow for other non-general indexing websites to do so. Some of these latter claims continue – somewhat controversially.

As an aside, the CFAA claim continues - but to widespread criticism:

“It’s curious that a company that prominently displays opposition to the CFAA and encourages customers to get involved to fix the CFAA, is at the same time suing start-ups for violating the CFAA for precisely the problems for which tech activists have ridiculed the CFAA”.

It’s worth noting In 2005, San Francisco Craigslist's ‘men seeking men’ section was attributed to facilitating sexual encounters and was the second most common correlation to syphilis infections and the company was facing pressure from the San Francisco Department of Public Health, which prompted CEO to say that the site has a very small staff and that the public must "police themselves".  However advertisements for "adult" (previously "erotic") services were initially given special treatment, then closed entirely on September 4, 2010. At the time Matt Zimmerman, senior staff attorney for the Electronic Frontier Foundation, said, "Craigslist isn't legally culpable for these posts, but the public pressure has increased and Craigslist is a small company" whilst Brian Carver, attorney and assistant professor at UC Berkeley, said that legal threats could have a chilling effect on online expression. "If you impose liability on Craigslist, YouTube and Facebook for anything their users do, then they're not going to take chances. It would likely result in the takedown of what might otherwise be perfectly legitimate free expression."

So once the darling of the tech world, it's now in the doghouse, accused of bullying and trying to stifle innovation - and competitors - with one commentator saying

“A lawsuit of this nature is much more suited to an old legacy gatekeeper, rather than a company that is supposedly of the internet generation. To say it's disappointing that Craigslist would engage in these kinds of tactics is an understatement”

http://en.wikipedia.org/wiki/Craigslist
Posted by Ben at 9:53 am

A smallish campaign with a homemade list would not be likely to yield much of a result. To achieve anything worthwhile, a much more aggressive effort is needed. Then, the age-old value analysis applies: projected earnings = margin on total projected sales - cost of campaign.