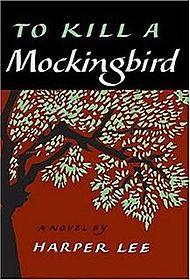 To Kill a Mockingbird is the Pulitzer prize winning book written by Harper Lee. The quasi autobiographical novel is based around the trial on a innocent black American, Tom Robinson,   wrongfully accused and then convicted of raping a white woman. Set over three years of the Great Depression in the fictional "tired old town" of Maycomb, Alabama, the novel focuses on six-year-old Scout Finch, who lives with her older brother Jem and their widowed father Atticus, a middle-aged lawyer who defends Tom Robinson. It was made into a motion picture, starring Gregory Peck as Atticus, which won three Academy Awards, quickly grossing more than $20 million from a $2 million budget. Published in 1960, the book is hugely popular and a set text in many US schools, and has been through numerous subsequent printings and became widely available through it's inclusion in the Book of the Month Club and editions released by Reader's Digest Condensed Books. In the years since publication, it has sold over 30 million copies and been translated into over 40 languages.

However, it has now been made clear that Harper Lee, now aged 87, does not own the copyright to her book. That is owned by Samuel Pinkus,  the son-in-law of Lee's former literary agent, and a company he allegedly created. The author has now filed a lawsuit in federal court in Manhattan, to re-secure the copyright and claiming unspecified damages: the lawsuit alleges that when her long-time literary agent, Eugene Winick, became ill in 2002, his son-in-law, Pinkus, switched several of Mr Winick's clients, who were with Winick's firm McIntosh and Otis, to his own company. Those authors included Lee.

The 87-year-old author alleges that in 2007, in a "scheme to dupe”, Pinkus took advantage of her declining hearing and eyesight to get her to assign the book's copyright to him and a company he controlled. Mr Pinkus is alleged to have transferred the rights to secure himself "irrevocable" interest in the income derived from Lee's book. The lawsuit also says that Pinkus sought to avoid paying legal obligations he owed to his father-in-law's company for royalties.  Lee also alleges that Pinkus failed to properly protect the copyright of the book and failed to respond to offers on e-book rights and a request for assistance related to the book's 50th anniversary. The lawsuit bids the court to assign any rights in the book owned by Mr Pinkus to Lee and asks that she be returned any commission he took from 2007 onwards saying

"The transfer of ownership of an author's copyright to her agent is incompatible with her agent's duty of loyalty; it is a gross example of self-dealing".

Labels: copyright, To Kill A Mockingbird

The quality of any art form can be judged precisely by it's longetivity. Unlike movies, great novels age very well. Good novels not so much. That alone shows how good novels like To kill a mockingbird, The catcher in the rye or The Great Gatsby are. They are the closest anyone has ever got to a perfect novel.