Scottish referendum: not an issue for publishers?

"North of a Border? Writers and the Scottish Referendum" is a feature article in the latest issue of the Authors' Lending and Collecting Society's ALCS News. Written by Scottish novelist Sara Sheridan (of the Mirabelle Bevan mysteries), this piece includes the following passage: 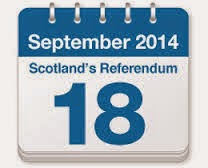 "... It remains to be seen how publishing models will be affected, if at all, by a Yes vote. Publishing Scotland has not issued a statement of its view, remaining strictly neutral, like many institutions, until the polling is complete. The publishing industry is worth around £3 billion a year to the Scottish economy and remains vibrant and well-funded by Creative Scotland (the Scottish Arts Council). There is no reason to believe that London-based publishers will change their view on publishing Scottish talent simply because of a boundary – they certainly don’t mind publishing Irish talent - it’s the talent that is key. In fact, the recent decision to provide public lending rights (PLR) payments from Ireland for UK writers proves that administering payments for rights across international boundaries is entirely possible ..."

This blogger thinks that this is certainly the case.  Whatever issues cause Scottish voters to side with a continuation of their Union with the rest of the United Kingdom or to go their own way when they vote later this week, it is unlikely that the impact of independence on publishing models on either side of the border will be a decisive factor.  Scotland will be expected to adhere to the same portfolio of international copyright and related rights obligations as it is presently committed to by its being part of the United Kingdom,  and this too would not appear to cause problems.