Proposals from the IPO -- but will the Minister tweet? 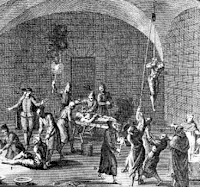 From the Intellectual Property Office in the United Kingdom comes this press release concerning proposed penalties for online infringement.

Following the publication of the Digital Britain Report, the Intellectual Property Office has outlined proposals to improve copyright licensing and increase financial penalties for online infringers.

• Legislative changes to license orphan works. Legislation will effectively deal with this issue in order to remove the infringement risk that currently prevents collecting societies licensing orphan works (arising as they do not have a mandate from the rights holder). [Curious way to begin the substantive bit of a press release with "tougher penalties" in its title] This will benefit cultural organisations by allowing them access to currently unusable material [which some have been accessing anyway because the risk is small or because they didn't know there was one]. It will also enable public access to a great number of historical works that are currently locked up [this seems to confuse access to use with access to view -- these are quite different issues].

• Consultation on improving operations of collecting societies. Government would not make recommendations to utilise the above powers without formal public consultation with stakeholders and other interested parties [the key word is "improving": it can mean different things when viewed from the perspectives of rights owners, users of works and consumers].

Commenting on new proposals, David Lammy, Minister of State for Intellectual Property said: "We must have the tools in place to tackle serious and organised IP crime. The proposed £50,000 maximum penalty for online and physical infringement sends a clear message to IP criminals. In this online age, IP infringement warrants a serious response. It needs to be stamped out- regardless of whether the offence is online or offline."

He added "In order to modernise and streamline the existing copyright system, I’m proposing a number of changes to the way collecting societies can operate.
I want to see greater development to ensure that our orphan works such as those great cultural works amassed in the BBC and the British Library are accessible to those who wish to benefit from them.

We should underpin the operation of collecting societies so that customers receive similar services and safeguards they would expect when dealing with a quality utility company."

I've always wondered what the purpose of adding quotes like this is, when they don't add any substance to the press release. Still, the Minister has kindly made himself available this Thursday evening at a reception. I hope to ask him for clarification of these proposals, as well as the really pressing question: why, when he has a presence on Twitter, does he never tweet on intellectual property issues -- even when prompted by me to do so?
Posted by Jeremy at 6:21 pm

I hope IPO will read the report behind this link: