Photo fun at the czech-out 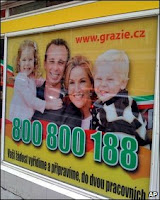 David Goldring (Novagraaf) has sent me this link to a BBC news item concerning Danielle and Jeff Smith, a US couple whose family photo, which they used on a Christmas card and then uploaded on to a blog, was found to have been used without their knowledge on an advertising poster for Grazie, a supermarket in the Czech Republic.
In classic copyright doctrine the mere fact that you don't police a work, but leave it where others can easily make use of it, does not affect your right to enforce it later, subject to the usual rules on limitation, estoppel etc. However, there is speculation as to whether, by making the photograph so publicly and conveniently available, the couple might be said to have implicitly permitted its use by others or to have abandoned any claim to enforce copyright in it subsequently. In this case the Czech supermarket probably gambled on the likelihood that Mr and Mrs Smith would never discover that the photo had been used -- but could it raise any argument in its defence? Thoughts, please ...
Posted by Jeremy at 8:49 am

Labels: abandonment, implied consent to use