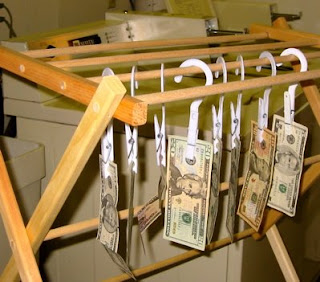 More from the Guardian, who tell a most fascinating tale involving a gang of chart-savvy popsters who made allegedly made hundreds of thousands of pounds laundering money taken from stolen credit card - by buying their own sound recordings from iTunes and Amazon. The gang are alleged to have made several recordings which they gave to an online US company which uploaded them to be sold online – and over five months they bought their own songs thousands of times, spending around $750,000 (£468,750) on 1,500 stolen US and UK credit cards.

According to the Metropolitan Police and the FBI, the criminal network then allegedly reaped the royalties from the tracks, pulling in an estimated $300,000, paid over by the two sites. Both sites were unaware of the fraud being committed against them. An chart-topping sixty officers from the Met's central e-crime unit and West Midlands Police arrested seven men and three women in London, Birmingham, Kent and Wolverhampton who are being held on suspicion of conspiracy to commit fraud and money laundering. The Guardian reports that Detective Chief Inspector Terry Wilson, of the e-crime unit, had this to say:

The arrests included three men aged 19, 23, and 41, and one woman, 37, all from Wolverhampton; a woman, 22, from Dartford, Kent; a woman, 36, and two men, 34 and 40, from Birmingham; and two men, 22 and 46, from Peckham, south London. The question I want to know is this – in a world of rampant peer-2-peer file swapping - with all these paid for 'legal' downloads - did any of the gang’s recordings make the digital download charts? Now that would have been top of the pops.

Image and more on money laundering at How to launder money by Philip Brewer http://www.silverbearcafe.com/private/launder.html
Posted by Ben at 11:47 am

I fail to see how this is defrauding iTunes or Amazon. The credit card owners, yes, but not the online music retailers.

The retailers had the tracks for sale in their libraries and paid royalties for sales of the tracks just as usual.

If Jay-Z buys his own track, he gets royalties and it's fine. The issue here is that the tracks were being bought with stolen credit cards.