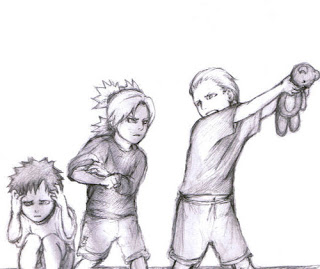 Back in July, when this blog was but a young pup, we posted an item ("When lawfully seized goods can't be retained") on Scopelight Ltd and others v Chief Constable of Northumbria and the Federation Against Copyright Theft [2009] EWHC 958 (QB) in which Mrs Justice Sharp (Queen's Bench Division, England and Wales) ruled that the police had no power to retain property under the Police and Criminal Evidence Act 1984 s.22 against the wishes of the person otherwise entitled to possession of it, once a decision not to prosecute has been taken, in order that a private body could consider whether to bring a prosecution, or indeed while that private prosecution was being brought.
Right: the picture looks grim -- unless it's an infringing teddy

The facts were simple: Mr & Mrs Vickerman, who ran a video search engine website, provided thousands of links to third party websites which hosted videos. Following a complaint by FACT, a private commercial organisation representing the interests of the audio-visual industry, that this website was hosting two third party file sharing websites, the police obtained a warrant to enter the Vickermans' premises on the basis that there were reasonable grounds for believing that offences of conspiracy to defraud and money laundering had been committed. The police lawfully seized internet server equipment and associated documents, which was later released by the police into the possession of FACT for the purposes of the police investigation.

After the Crown Prosecution Service (CPS) decided not to prosecute, the Vickermans asked for the return of the seized property. The police said they couldn't, since FACT was considering whether to bring a private prosecution. The Vickermans then sued for delivery up of the seized property and damages for conversion, while FACT began a private prosecution (which at the time of the trial was still proceeding) in respect of various copyright offences.

The police and FACT both argued that retention was permitted because it was for use as evidence at a trial and forensic investigation for an offence which was the subject of an ongoing prosecution. Sharp J disagreed. In her view, (i) the power of the police to seize, use and retain property was conferred on them for the better performance of their public functions and for law enforcement purposes: those purposes did not include the seizure, use or retention by the police of private property to assist private interests; (ii) Parliament never considered whether private property, once seized by the police, could be used by a private body for its own purposes (including considering whether it should bring a private prosecution or bringing a private prosecution); (iii) while the right of private bodies or individuals to bring a private prosecution was well established, it did not carry with it the automatic right to override private property rights in the absence of an order of the court, nor did it carry with it the powers conferred by Parliament by the police.
Today the Court of Appeal (Lords Justices Ward, Wilson and Leveson) in [2009] EWCA Civ 1156 allowed the appeal and remitted the case for further submissions as to the continuation of the interim order. Giving judgment for the Court, Leveson LJ said, at paras 50 to 54:

"The position can be tested by reference to FACT. It is not suggested that there is not a public interest in the prevention of copyright infringement. The real concern is that commercial organisations have formed FACT to protect their own commercial interests and can use criminal prosecution as a club with which to protect those interests. That is clear from the way in which the matter was put in Scopelight's skeleton argument, which criticises FACT's failure to commence civil proceedings, having observed (at paragraph 20):

"It is difficult to see where the public interest lies in prosecuting such a difficult case in the criminal courts, clogging up a great deal of court time, simply to satisfy the commercial ends of various multinational companies."

Quite apart from the fact that the Copyright, Designs and Patents Act 1988 provides for criminal sanctions (meaning that Parliament has determined that criminal proceedings are appropriate in these cases), the premise reveals precisely the difficulty which holders of copyright are likely to face in pursuing cases through the police and the CPS. These cases are complex, specialist knowledge will inevitably be required to pursue them, and each case is likely to be difficult, time consuming and expensive ... In a time when allegations of terrorism and other extremely serious crime take up more and more time and involve ever increasing resources, it is inevitable (and appropriate) that the CPS will have to be selective. For my part, I see no reason why the CPS should not be entitled to conclude that it is unnecessary for them to embark on another prosecution while issues of law are being resolved ... If there is no merit in the prosecution, that will no doubt be revealed. A preparatory hearing under Part III of the Criminal Procedure and Investigations Act 1996 can, if it is thought appropriate, generate an early resolution of legal issues (particularly if determinative). If the power to prosecute is being used in bad faith, or inappropriately with the true aim of preventing Scopelight or the Vickermans from pursuing a legitimate commercial venture, as I have indicated, there are various mechanisms available to the court to prevent an abuse of its process.

What then should be the approach? ... , in my judgment, the phrase "anything which has been seized by a constable ... may be retained so long as is necessary in all the circumstances" requires the police to consider each case on its own individual facts, at each stage in the process of investigation and prosecution. If the CPS is prosecuting the case, whatever is required for forensic investigation or the prosecution will obviously be retained but, even then, consideration will have to be given to ensuring that no more than is necessary for the case (either to pursue it or to rebut a potential defence) is kept. If a prosecution is not to be pursued by the CPS but some other public or private body wishes to pursue a private prosecution, the relevant circumstances include (but are not limited to): the identity and motive of the potential prosecutor; the gravity of the allegation along with the reasoning behind the negative decision of the CPS and thus the extent to which, in this case, the public have a legitimate interest in the criminal prosecution of this conduct; the police view of the significance of what has been retained; and any material fact concerning the proposed defendant. All this falls to be considered so that a balanced decision can be reached upon whether retention is necessary "in all the circumstances". Such a decision would be capable of challenge on traditional public law grounds.

I add only this. Mr Purvis [for Scopelight] raised the spectre of the police having to search for anyone interested in pursuing a private prosecution before reaching a decision on retention. I reject that suggestion. In the normal course, it will be perfectly obvious whether anyone is interested in mounting a private prosecution in the event of an adverse CPS decision but there is no obligation on the part of the police to look for a candidate. A request to return property will obviously have to be dealt with timeously and I echo the suggestion of Carnwath LJ in Gough v Chief Constable of West Midlands Police [2004] EWCA Civ 206 at para 44-5 (with which Potter LJ, as he then was, agreed) that if civil proceedings are commenced for return of the property, the police will have to give careful thought as to whether they are in practice able to defend the proceedings and whether section 22(1) enables them to retain the property "for a short period while they consider the position". He later suggested that, in normal circumstances, that should be "at or about the time for serving their defence"".

For good measure, the Court rejected the argument that the failure to return the Vickermans' property infringed their human rights under the European Convention on Human Rights.

This decision will be welcomed by all those who are involved in the grubby, mundane day-to-day side of enforcement, who sometimes feel that, whatever the law on infringement may and however powerfully it protects copyright owners' interests, it's what happens at this level which determines whether high-flown principles of protection have any real guts to them.
Posted by Jeremy at 3:19 pm