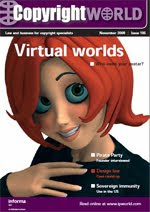 * With a close-up portrait of an avatar occupying centre page, the cover of this month's Copyright World is simultaneously attractive and repugnant. The story behind it, "Copyright in Virtual World Creations" by Pillsbury Winthrop Shaw Pittman LLP's Benjamin Duranske, explores the rights which creators of virtual goods in 3D websites may seek to invoke. As the journal explains:

"The increasing popularity of computer-generated virtual worlds on the internet where users can interact as “avatars” highlights a gap in the coverage of current copyright law. This gap arguably gives creators of certain virtual goods, such as virtual clothing, buildings, and hairstyles, significantly greater protection from infringement than that enjoyed by their real-world counterparts".

Other features in this issue include an interview with Pirate Party founder Rikard Falkvinge and an intriguing summary by Barry Kramer and Glenn G. Pudelka (Edwards Angell Palmer & Dodge LLP) of the application of sovereign immunity in US copyright disputes.


* The Journal of Competition Law & Economics, a scholarly title published by Oxford University Press (click here for further JCLE details). This issue carries two major pieces of interest to copyright lawyers. The first is Randal C. Picker, "The Google Book Search Settlement: a new orphan-works monopoly?". According to the abstract, "

This paper considers the proposed settlement agreement between Google and the Authors Guild relating to Google Book Search (GBS). I focus on three issues that raise antitrust and competition policy concerns. First, the agreement calls for Google to act as agent for rightsholders in setting the price of online access to consumers. Google is tasked with developing a pricing algorithm that will maximize revenues for each of those works. Direct competition among rightsholders would push prices towards some measure of costs and would not be designed to maximize revenues. The consumer access pricing provision might very well fail a challenge under Section 1 of the Sherman Act. Second, and much more centrally to the settlement agreement, the opt-out class action will make it possible for Google to include orphan works in its book search service. Orphan works are works as to which the rightsholder cannot be identified or found. The opt-out class action is the vehicle for large-scale collective action by active rightsholders. Active rightsholders have little incentive to compete with themselves by granting multiple licenses of their works or of the orphan works. Plus under the terms of the settlement agreement, active rightsholders benefit directly from the revenues attributable to orphan works used in GBS. We can mitigate the market power that will otherwise arise through the settlement by expanding the number of rights licenses available under the settlement agreement. To do that, we should take the step of unbundling the orphan works deal from the overall settlement agreement and create a separate license to use those works. All of that will undoubtedly add more complexity to what is already a large piece of work, and it may make sense to push out the new licenses to the future. That would mean ensuring now that the court retains jurisdiction to do that and/or giving the new registry created in the settlement the power to do this sort of licensing. Third, there is a risk that approval by the court of the settlement could cause antitrust immunities to attach to the arrangements created by the settlement agreement. As it is highly unlikely that the fairness hearing will undertake a meaningful antitrust analysis of those arrangements, if the district court approves the settlement, the court should include a clause—call this a no Noerr clause—in the order approving the settlement providing that no antitrust immunities attach from the court's approval".

The second, by Jerry A. Hausman and J., Gregory Sidak, is "Google and the Proper Antitrust Scrutiny of Orphan Books". The abstract states:

"We examine the consumer-welfare implications of Google's project to scan a large proportion of the world's books into digital form and to make these works accessible to consumers through Google Book Search (GBS). In response to a class action alleging copyright infringement, Google has agreed to a settlement with the plaintiffs, which include the Authors Guild and the Association of American Publishers. A federal district court must approve the settlement for it to take effect. Various individuals and organizations have advocated modification or rejection of the settlement, based in part on concerns regarding Google's claimed ability to exercise market power. The Antitrust Division has confirmed that it is investigating the settlement. We address concerns of Professor Randal Picker and others, especially concerns over the increased access to "orphan books," which are books that retain their copyright but for which the copyright holders are unknown or cannot be found. The increased accessibility of orphan books under GBS involves the creation of a new product, which entails large gains in consumer welfare. We consider it unlikely that Google could exercise market power over orphan books. We consider it remote that the static efficiency losses claimed by critics of the settlement could outweigh the consumer welfare gains from the creation of a valuable new service for expanding access to orphan books. We therefore conclude that neither antitrust intervention nor price regulation of access to orphan books under GBS would be justified on economic grounds".

* Finally, issue five of Sweet & Maxwell's bimonthly European Copyright and Design Reports contains full-text reports of three cases, of which one is a Scottish decision, Toner v Kean Construction (Scotland) Ltd, a decision of the Outer House, Court of Session, on procedural issues relating to when and whether a single action for infringement of copyright in architectural drawings can be brought against two defendants.
Posted by Jeremy at 5:50 am