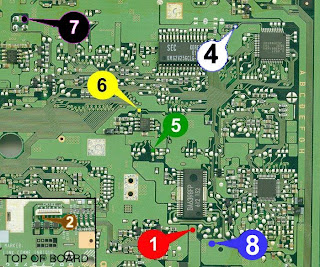 Gilham v R [2009] EWCA Crim 2293, 9 November 2009, is a decision of the Criminal Division of the Court of Appeal, England and Wales (Stanley Burnton LJ, Penry Davey and Sharpe JJ). Put simply, between October 2003 and January 2006 Gilham ran a business selling components and devices for games consoles marketed by Microsoft, Nintendo and Sony. Those companies used protective technological measures to prevent counterfeit or 'pirate' copies of games from being played on their consoles. Gilham sold modification chips (modchips), either by themselves or pre-inserted into games consoles together with the equipment needed to fit them. In some cases, a purchaser would have had to download software and install it.

Once installed, the modchips enabled counterfeit games to be played on the consoles. The running of the games had the following effect: during the playing of DVDs and CD-ROMs on which games were sold for use with the games consoles, data was transferred from the disk into the console's random access memory (RAM). At the point at which the game was played, the data in the RAM was overwritten by different data from the disk. The screen would display images of scenes, characters and objects which had been created by those responsible for the composition of the game.

Gilham was charged with offences arising out of his dealing with modchips. According to the prosecution, the modchips were devices, products or components which were primarily designed, produced or adapted for the purpose of enabling or facilitating the circumvention of effective technological measures within the meaning of section 296ZB of the Copyright, Designs and Patents Act 1988 as amended. He was also charged with money-laundering offences relating to the proceeds of sale.

In order for the prosecution to prove an offence contrary to eg section 296ZB(c)(i), it had to prove that (i) the game was, or was included in, a copyright-protected literary work; (ii) the playing of a counterfeit DVD on a games console involved the copying of such a work; (iii) such copying was of the whole or a substantial part of the work; (iv) the games console and/or genuine DVDs (ie copies of the copyright work or works created by or with the licence of the owner of the copyright) included effective technological measures within the meaning of section 296ZF which were designed to protect those works and (v) Gilham, in the course of business, had sold or let for hire a device, product or component which was primarily designed, produced or adapted for the purpose of enabling or facilitating the technological measures.

The Court of Appeal dismissed Gilham's appeal, holding as follows:

* 'Substantial' was a difficult word to pin down. It could mean 'not insubstantial' or 'of ample or considerable amount, quantity of dimensions'.

* The key issue was whether, in creating Gilham's work, substantial use had been made of the skill and labour which had gone into the creation of the copyright work and thus of those features which made it an original work.

* The recitals to Directive 2001/29 on the harmonisation of certain aspects of copyright and related rights in the information society emphasised the importance of protecting copyright and related rights in multimedia products such as computer games. Accordingly, if devices such as modchips could be sold with impunity, the United Kingdom would not be conferring the protection of those rights required by the Directive.

* It also accorded with common sense to say that a person who played a counterfeit DVD on his games console, and saw and heard the visions and sounds which were the subject of copyright, did make a copy of at least a substantial part of the game.

* Even if the contents of the RAM at any one time were not a substantial copy, the image displayed on screen was: what was shown on-screen when the pause button on a game console was pressed was a still image, a copy of an artistic work, generated by the digital data in the RAM. The fact that players did not normally pause the game was immaterial, since it was sufficient that a transient copy was made.

* On the basis of the foregoing, Gilham was rightly convicted of the offences charged under the Act and of the money laundering offences relating to the proceeds of his sales.

" ... we repeat with emphasis what Jacob LJ said in Higgs about the trial of cases involving recondite issues of copyright law before a jury. Cases that, for example, involve determination of difficult questions whether a copy is of a substantial part of a copyright work, can and should be tried in the Chancery Division before specialist judges. They can be so tried much more efficiently in terms of cost and time than before a jury, and questions of law can if necessary be determined on appeal on the basis of clear findings of fact. In appropriate cases, the Court will grant injunctive relief, and a breach of an injunction will lead to punishment for contempt of court. If the facts proven against a defendant show that he has substantially profited from criminal conduct, proceedings for the civil recovery of the proceeds of his crimes may be brought under Part 5 of the Proceeds of Crime Act 2002".

Are criminal prosecutions for TPM violations or copyright infringement common in the UK?