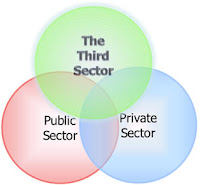 A press release today from the Intellectual Property Office announces proposed amendments to UK copyright law in favour of the so-called Third Sector. It runs as follows:

The Government today announced its response [37 pages, here] to the consultation on changes to exemptions for charitable, not-for-profit and other Third Sector organisations in relation to licences required for the public playing of sound recordings and broadcast music.

The changes involve repealing existing exemptions [Duly noted. Repeals mean finding Parliamentary time. If time is given over for these repeals, perhaps it will be possible to tag other bits of legislative copyright reform on to them]. This will simplify the law and help greater understanding of the rights of music users and those who own the copyright.

Following the consultation, Phonographic Performance Limited (PPL) the collecting society whose members this affects, have agreed a number of initiatives, working with PRS for Music to help Third Sector organisations that will require PPL licences when the repeals take effect next year. They aim to ensure a joined up approach from PPL and PRS for Music.

The key initiatives are:

• A new joint licensing scheme: this aims to simplify the process for a Third Sector organisation obtaining a licence for playing sound recordings and broadcast music. This will cut down on administration costs for both users and collecting societies. [This looks sensible and is a good advertisement for what can be done by talking and negotiating]

• PPL consulting Third Sector organisations with the Community Sector Law Monitoring Group (CSLMG) to agree affordable tariffs" [If affordability is the only criterion, rights holders might have a rough ride here. Presumably there will be countervailing criteria such as fairness ...].