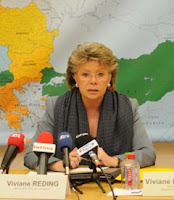 Viviane Reding, accepting an award in Barcelona this morning, flagged her intention to try to extend Brussels' powers to legislate for copyright in the wake of the Lisbon Treaty.
Ms Reding, who has been nominated to retain her role in the new Commission which takes office when the Lisbon Treaty comes into force, stated that she wishes to see a European copyright regime, initially to run in tandem with, and ultimately to replace, national copyright laws.
No details were forthcoming - but no doubt this type of approach will be music to the ears of the Eurosceptic brigade.
Original story (in Spanish) courtesy of European PressPhoto Agency can be read here
Posted by John Enser at 2:03 pm