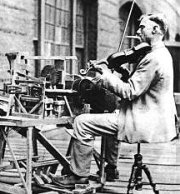 For those living outside the European Union, the prospect of pan-European copyright -- and pan-European licensing practice -- is intriguing. After all, there is a single market in which there is a dual system of national rights and pan-European rights in place for registered trade marks, registered designs and plant variety rights, and the pan-European patent right is now a matter of 'when', rather than 'whether', so what's holding up the pan-European copyright with its corollary, the pan-European licence. This makes even more sense where the licensed territory is exploited via the internet, a medium for which national borders were inappropriate ab initio and even more irrelevant as time marches on.  Anyway, a reader from outside the EU has written to me to ask about public performance rights in the EU:


"What is the current position regarding the regulated collection of royalties for public performances that are delivered over the internet in an integrated manner in the EU?"

Offhand, I couldn't think of a good answer, and ten minutes on my favourite search engine didn't leave me any better able to respond.  The question has a competition dimension to it as well as a copyright one. Can any reader suggest some worthwhile links and/or supplementary reading materials that will aid an "alien"?

Another reader, Sandra Alvera (Panasonic Europe), who has been closely following copyright levy issues, writes to draw our attention to Commissioner's Barnier's announcement about appointing Antonio Vitorino a mediator to address the process of stakeholder dialogue which, if we are lucky and he is successful, might just lead to the solution of some of the problems associated with copyright levies. Thanks, Sandra, for this link. The full text of the Commissioner's speech can be read here. He concludes with the following words:


"The fact that authors and other rightholders must receive fair compensation for the use of their work is not at issue. The issue is that all schemes used for the collection of this compensation should be organised in the most efficient way possible".

Fairness and efficiency make uncomfortable bedfellows, though, since efficiency has a deep and meaningful relationship with another powerful personality in the world of copyright -- arbitrary convenience.  Let's see how this troika works out ...

The ever-industrious Howard Knopf (Excess Copyright) has compiled a list of factums in the fair dealing cases which are currently before the Supreme Court of Canada: (i) SOCAN v. Bell et al (the “iTunes previews” case) SCC #33,800 and (ii) Province of Alberta et al v. Access Copyright (the K-12 “education” case) SCC #33,888. You can access them here. 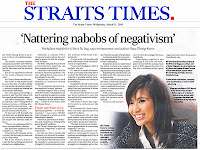 From Andy Johnstone comes this link to a dispute between Singapore Press Holdings (publisher of The Straits Times) and Yahoo! in what he suspects might become "Singapore's Meltwater moment". Noting that the legislation has some similarities to the UK's Copyright, Designs and Patents Act 1988 but also some notable differences, Andy prudently declines to call the odds on the outcome of this little spat over Yahoo!'s copying of editorial content into its aggregator: that's a job for one of our Singaporean readers (any volunteers?)
Posted by Jeremy at 10:38 am