Hollywood’s Copyright Wars: From Edison to the Internet: a review 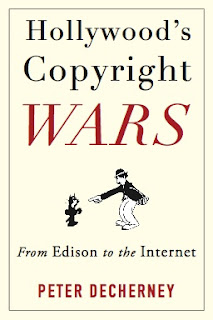 Hollywood’s Copyright Wars: From Edison to the Internet, by Peter Decherney, an associate professor of Cinema Studies, English, and Communication at the University of Pennsylvania whose research focuses on media and internet policy, especially government regulation of Hollywood. Unlike those who pursue the now gradually fading but still clearly discernible European tradition of displaying one's academic credentials by taking an inherently sexy subject and then giving it the anaconda treatment, crushing every ounce of human interest out of it, Decherney follows the American tradition of producing a book in which scholarship and style go hand in hand, its subjects are allowed to speak for themselves and the verbs are generally active. The references, which appear at the end of the book rather than where this reviewer prefers them -- at the foot of each page -- are sufficient to support the author's narrative and do not serve as monuments to bibliographic seal.

Starting with the title, the "from Edison" theme is one which appeals to authors; trade mark expert Frederick Mostert chose the same allusion in From Edison to iPod (noted here) in his book on demsytifying profitable IP exploitation and Nicholas G. Carr ran "from Edison to Google" as a subtitle to his up-in-the-Cloud book The Big Switch.  There may be others. In a different world, in which we were more accommodating of science than religion, we might have numbered the years of our calendar from the birth of Edison. However, while the great inventor gets plenty of space in Peter Decherney's enjoyable analysis, it's probably fair to say that the Hollywood bit sells more copies.  The publisher's blurb confirms this:


"Copyright law is important to every stage of media production and reception. It helps determine filmmakers’ artistic decisions, Hollywood’s corporate structure, and the varieties of media consumption. The rise of digital media and the internet has only expanded copyright’s reach [Only? It has also expanded the reach of infringers, consumers, creators of derivative works ...]. Everyone from producers and sceenwriters to amateur video makers, file sharers, and internet entrepreneurs has a stake in the history and future of piracy, copy protection, and the public domain.

Beginning with Thomas Edison’s aggressive copyright disputes and concluding with recent lawsuits against YouTube, Hollywood’s Copyright Wars follows the struggle of the film, television, and digital media industries to influence and adapt to copyright law. Many of Hollywood’s most valued treasures, from Modern Times (1936) to Star Wars (1977), cannot be fully understood without appreciating their legal controversies [some would assert that much of Star Wars actually can't be understood at all-- but that's a discussion for another time]. Peter Decherney shows that the history of intellectual property in Hollywood has not always mirrored the evolution of the law. Many landmark decisions have barely changed the industry’s behavior, while some quieter policies have had revolutionary effects [this conclusion shows a bit of independent judgment on Decherney's part. It's so easy to see behaviour changes when one expects them, whether they happen or not]. His most remarkable contributions uncover Hollywood’s reliance on self-regulation. Rather than involve congress, judges, or juries in settling copyright disputes, studio heads and filmmakers have often kept such arguments “in house,” turning to talent guilds and other groups for solutions [here's a subject for comparative research: is this trend reflected in other countries that had sizeable movie industries at the beginning of the Edison era and, to the extent that the answer is yes or no, can that be correlated with the success or failure of those industries in fighting their own copyright wars]. Whether the issue has been battling piracy in the 1900s, controlling the threat of home video, or managing modern amateur and noncommercial uses of protected content, much of Hollywood’s engagement with the law has occurred offstage, in the larger theater of copyright. Decherney’s unique history recounts these extralegal solutions and their impact on American media and culture".

A fun exercise for readers is to read this book just before or after Bill Patry's How to Fix Copyright.  Both focus on the effects of technological change. Decherney writes from the standpoint of a specific industry evolving over a lengthy period of time, while Patry writes in general terms and addresses the present. Enjoy!