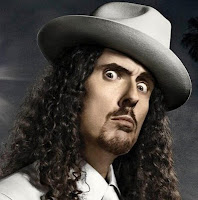 CMU Daily reports that Weird Al' Yankovic is the latest artist to file a digital royalties claim in the US, in a wide ranging royalties lawsuit that accuses Sony Music of improper reporting of its costs, of failing to pass on any of the damages it won from file-sharing companies like Kazaa, and of paying him a record sale royalty on download sales when such revenues should be treated as licensing income. He joins Toto in the latest assault on the major, who had recently settled (subject to court approval) the 2006 lawsuit launched by The Allman Brothers, Cheap Trick and others which would see artists receive a 3% increase in their share of download revenue and a lump sum payment. Meanwhile EMI faces litigation on this issue from Kenny Rogers, and Warner Music from Sister Sledge and Tower Of Power.

Whilst obviously (and perhaps unsurprisingly) less than impressed with the Allman Brothers' class settlement, it’s interesting to see that Yanovic (like Rogers) also wants to know why he hasn’t received a share of monies received by Sony from P2P litigation, or from the equity stakes the major has taken in digital start-ups, particularly as his track ‘White & Nerdy” was parodied on YouTube and repeatedly streamed with the lawsuit claiming that "A portion of Sony's equity share in YouTube is directly apportionable and allocable to 'White & Nerdy' as well as other content created by Yankovic".
Posted by Ben at 12:52 pm