From the pen of guest contributor Miriam Levenson comes some fascinating information about George Michael Cohan, the tenth in the series of twelve creative talents whose deaths in 1942 resulted in the release of their works into the public domain earlier this week in 'life-plus-70' copyright jurisdictions. 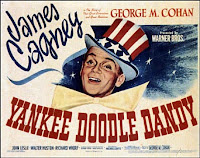 Cohan’s Irish Catholic parents were travelling vaudeville performers, and George joined them on the stage from his infancy – progressing from prop to singer, dancer and violinist. Together with his older sister, the family formed a troupe called ‘The Four Cohans’. As a teenager, George began writing original songs and skits for his family act which caught the attention of Broadway. George was 15 years old when he made his Broadway debut, and sold his first songs to a national publisher. He never looked back, and by 1901 he wrote, directed, produced and starred in his first Broadway musical for The Four Cohans.

George’s first big hit on Broadway was Little Johnny Jones in 1903, which featured two of his famous songs – 'Give my Regards to Broadway' and 'The Yankee Doodle Boy'. During the First World War, 'You’re a Grand Old Flag' and 'Over There' became a hit with American soldiers and public alike, and Cohan was awarded the Congressional Gold Medal by President Roosevelt for his contribution to national morale – the first person from the artistic world to be thus honoured. 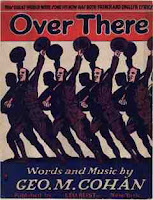 Cohan’s catchy melodies and brilliant lyrics made him one of the leading Tin Pan Alley songwriters, and by 1920 he had produced over 300 original songs and more than 50 musicals, plays and revues on Broadway. Although Cohan’s fame rests mainly on his output of songs, he made a name for himself as a ‘serious actor’ as well during his lifetime. To Cohan, dance was not just ‘razzle dazzle’, but a powerful means of heightening the drama. He was one of the earliest pioneers of the ‘book musical’ genre, where songs and dances are fully integrated into a well-made plot. Today, an eight-foot bronze statue of Cohan stands in Times Square at Broadway – a unique tribute to ‘the man who owned Broadway’.