The twelfth and final personality depicted in this series of people whose work fell out of copyright at the beginning of 2013 in 'life-plus-70' countries is Janusz Korczak, whose tale is told here by guest contributor Miriam Levenson: 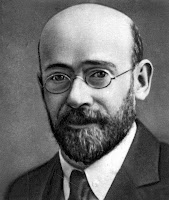 Born Henryk Goldszmit to a Polish Jewish family, Korzcak adopted this pseudonym during his years as a medical student at the University of Warsaw. This double persona lasted for a few years; while Henryk Goldszmit went on to qualify as a paediatrician, Janusz Korzcak gained literary recognition with his novels about children. After seven years working at Warsaw Children’s Hospital, Korzcak found that his fame as a novelist was disrupting his work, with families of patients converging on the hospital to meet the doctor who wrote novels. In 1912 Korzcak gave up medicine and opened an orphanage for Jewish children. During the First World War he was conscripted as a doctor, leaving the orphanage in the capable hands of his co-worker ‘Madame Stefa’ (Stefania Wilczynska). The Great War inspired Korzcak to write How to Love a Child, outlining his psychological observations of what is needed to raise children successfully. Korzcak ran his orphanage like a ‘children’s republic’, with its own small parliament, court system and daily newspaper. As time went on and the orphans experienced a great deal of suffering, Korzcak would tell them fairy-tales which helped them understand and cope with life’s hardships. Korzcak also gained fame and popularity with his radio show during the 1930s, where he promoted the rights of children and gave advice on how cope with difficult children. 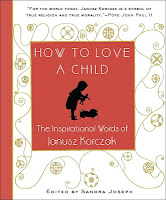 In 1940, Korzcak’s orphanage was forced to move into the Warsaw ghetto. Korzcak was offered sanctuary on the ‘Aryan side’ a number of times, but he consistently refused to leave his children. In August 1942, the 200-odd orphans, together with Korzcak and his staff, were transported to Treblinka extermination camp. Korzcak dressed the children in their finest clothes and told them each to take a favourite book or toy. When the Germans came for them, the children marched out, singing their orphanage song and carrying its flag. The writings of Stary Doktor (‘the Old Doctor’), as he was affectionately known, have been translated into many languages and live on. Korzcak is best known for his fiction (for both adults and children) and his pedagogy.

Korczak is believed to be killed in August 1942, but according to the decision of court from 1954, the official date of his death is May 9th, 1946.

Modern Poland Foundation made an effort to correct the mistake before The Regional Court of Lublin (which declared Korczak's date of death in the first place) but it's an ongoing litigation.

Until the new decision, the date of his works falling out of copyright is the beginning of 2017.