The first Tamil to be recorded in the 1709 Blog's roll-call of twelve writers and creators whose works entered the public domain at the beginning of 2013 in life-plus-70 countries, the multi-talented U.V. Swaminatha Iyer, is brought to light by guest contributor Miriam Levenson, who writes: 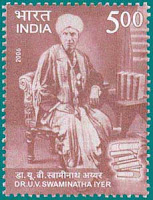 Known as Tamil Thatha, ‘Grandfather of Tamil’, Swaminatha Iyer was a scholar and researcher. The contribution he made to classical Tamil literature and music is immeasurable. Swaminatha Iyer was born into a poor family in a small village. His father was a musician and encouraged him to pursue a similar trade, but Swaminatha Iyer decided to concentrate on the study of Tamil. At the age of 25, he was appointed a Tamil teacher at the Government Arts College of Kumbakonam following a rigorous selection process. He was a charismatic teacher, adored by his students despite the fact that Tamil was regarded as an inferior language at the time. In the 1880s very few Tamil literary works were available for study – just a handful of minor poems. As a result, Tamil was ignored by most people in favour of Sanskrit and English.

Swaminatha Iyer took it upon himself to try and recover the hidden treasures of Tamil literature by searching for missing palm leaf manuscripts. Alongside his teaching, Swaminatha Iyer conducted long and arduous journeys across Tamil Nadu and beyond, visiting every hamlet and knocking on every door. It was a formidable search that lasted until his death – but it was extremely fruitful. Swaminatha Iyer collected 3,067 original ancient manuscripts, published almost 100 books on Tamil literature, and unearthed a rich and beautiful tradition of poetry, devotional works and Puranas (Hindu, Buddhist and Jain religious texts detailing history, philosophy, genealogy and cosmology).

Swaminatha Iyer’s publications were not merely transcriptions of the manuscripts he discovered. He edited them, adding extensive footnotes, indices and commentaries, as well as biographical information about the authors. Swaminatha Iyer’s contribution to Tamil culture also extended to the discovery of Tamil music sources from previous eras. Until these discoveries were made, very little had been known about Tamil music history. Swaminatha Iyer’s publications paved the way for extensive research into the presence of Tamil music in the earlier centuries. In honour of these contributions, the title of Mahamahopathiyaya (literally, ‘Greatest of Great Teachers’) was conferred on Swaminatha Iyer, as well as an honorary doctorate from the University of Madras and, more recently, a commemorative postage stamp.