Heck of a Haka Row 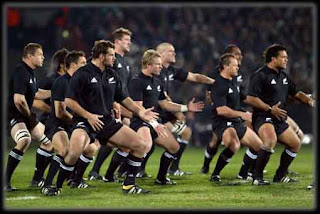 IP World reports that the UK's Everton Football Club has offended not just the sensitivities of New Zealand's Maori, but also tribal IP, by performing the traditional maori haka to launch the club's new football strip.
The New Zealand government had recognised the Ka Mate haka - traditionally performed by NZ's All Black Rugby team since 1905- as IP vested in the Ngati Toa tribe in February of this year. It seems my compatriots - for I have to declare an interest albeit as whanau of a different tribe - managed to get over the difficulties of authorship and duration. Consequently, the Ngati Toa were recognised as originators of the haka because Ngati Toa war leader Te Rauparaha had originated the traditional war dance. 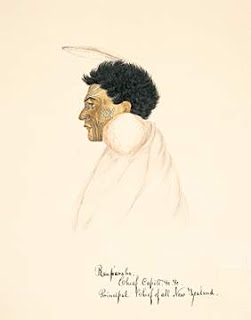 After the rejection of a trademark application, the NZ goverment gave Ngati Toa powers to prevent "inappropriate uses" (examples here) as part of a larger settlement. A number of NZ tribes, represented by IP lawyer Maui Solomon, found Everton's misappropriation culturally insensitive - which is of course it is! For why - see here.
For those of you that want to join in when next the All Blacks visit and thrash your team, here is your cheat sheet:
Ka mate! Ka mate! Ka ora! Ka ora! Ka mate! Ka mate! Ka ora! Ka ora! Tenei te tangata puhuru huru Nana nei i tiki mai, Whakawhiti te ra A upane! ka upane! A upane! ka upane! Whiti te ra! Hi!!
Posted by Harcourt at 2:06 pm

You would have thought advertisers would have learned about the sensitivies surrounding the haka after the number of times it has been mis-used. The story hit the NZ papers too, and a video of the Everton version can be seen at http://www.stuff.co.nz/sport/2731957/A-stolen-hi-ha-hi-haka

One is reminded of the Duke of Wellington misquote re his troops "I don't know what effect these men will have upon the enemy, but, by God, they frighten me"