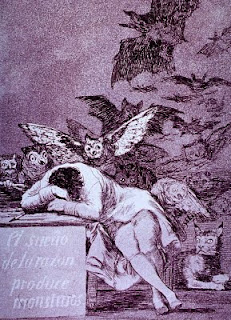 One of our readers has contacted us to see if he can invoke their collective copyright wisdom:

"I'm trying to find out what happened with the Spanish Artist's Resale Right. You may recall that in January 2008 Spain received a rap on the knuckles from the European Court of Justice for not implementing directive 2001/84. Spain's failure to implement was later noted by the Commission's Internal Market Scoreboard (at page 15). However, the most recent edition of the Scoreboard no longer "names and shames" Spain for its failure to implement the Directive. This suggests the Directive has now been implemented by Spain.

Right: a Spanish legislator, in the depth of despair following the ECJ decision

Would you be able to ask your readers if they have any details of the implementation? I have a short(ish) list of questions (on the variations that are at each member state's discretion when implementing the directive) if anyone is feeling especially helpful. But just a date for when implementation took place would be a good start".

If any reader has the answer, or his happy to be put in touch with our reader, just post a comment below or email me here, marking your email subject line "Spanish Resale".
Posted by Jeremy at 1:18 pm