Jailbreaking through a pile of bricks 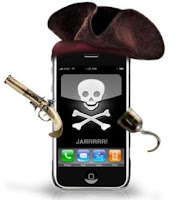 As blogger Jeremy reported here, the U.S. Library of Congress issued a statement on Monday that legalized “jailbreaking” wireless telephone handsets. Jailbreaking is a process of modifying the device’s security software in order to enable interoperability with legally obtained software applications or to connect to an alternative network if the alternative network operator authorizes the connection.

This exemption to the Digital Millennium Copyright Act (DMCA) applies equally to all wireless telephone handsets, their manufacturers and their network operators. However, if the consumer and media frenzy in the past few days are any reflection, it would seem to have been written specifically to address Apple’s iron hold over U.S. users of the iPhone, who are typically required to purchase apps from the Apple App Store and to use only AT&T wireless network service. (Apple lobbied aggressively against this DMCA exemption.) To counter previous instances of jailbreaking, Apple had used its operating system upgrades, which automatically install on active iPhones, to lock any unauthorized software. Locking the unauthorized software essentially rendered the phones as useless as a brick for communication purposes (leading to this tactic being known as “bricking the iPhone”). In addition, Apple warned users that jailbreaking violated and invalidated their warranty, so users could not seek free assistance or services from Apple technicians if the user experienced trouble with their iPhone. Apple claimed these consequences were justified because the jailbreaker had violated copyright law. 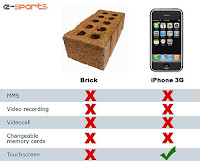 Then again, looking at this comparison chart, maybe the iPhone isn't that different from a brick after all....

With jailbreaking now legal under copyright law, will Apple continue bricking phones and refusing to service legally jailbroken phones? Apple has already issued a statement reiterating that jailbreaking invalidates its warranty. And it retains the right to do so under the terms of its warranty and user agreements. But will Apple be able to continue the practice of bricking phones during operating system upgrades? Doing so, it seems to me, punishes users for an action that is now perfectly legal under copyright law. It is one thing to invalidate a warranty and refuse free system services, but quite another to render the product inoperable. If anyone has thoughts on Apple’s bricking policy, please feel free to leave comments below.

And if you’re a U.S. iPhone owner considering a jailbreak, I’ve heard that T-Mobile USA offers technical support (to replace the invalidated Apple warranty) to iPhone owners who subscribe their jailbroken iPhones with T-Mobile service.
Posted by Miri Frankel at 8:35 pm