Rogue in court over tale of dead twin's spirit 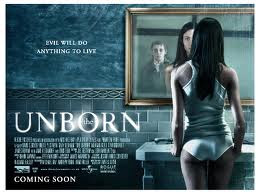 Another (horror) tale of ideas and expression is being told in the fair land of Hollywood.
As timely and dutifully reported by The Hollywood Reporter, Rogue Pictures and parent company Relativity Media are being sued for allegedly copying the idea behind the 2009 horror film The Unborn. This is the plot of the film, as found on IMDb:
While babysitting a boy and his baby brother, Casey Beldon has a dreadful nightmare involving a weird dog and an evil child, and she tells her best friend Romy over the phone. Casey is haunted by this boy, and when she goes to the ophthalmologist, he asks if she has a twin brother or sister. She asks her father and discovers that her mother lost a son that died in the womb. Casey suspects that she is haunted by the spirit of her brother. She finds a letter addressed to a woman called Sofi Kozma and a creepy picture at home that belonged to her mother. She goes with Romy to a retirement home to meet Sofi, a survivor of the experiments during the Holocaust. But Sofi tells Casey she had never met her mother and later calls Casey to tell her she is in great danger.

The lawsuit was filed yesterday before the Los Angeles Superior Court by a relative of Erna Segal (who died in 2003), who published in 1990 a book entitled Transfers, using the nom de plume of Erna Olinger.
This, according to Google Books, is the story of world-renown psychiatrist Dr. Alan Herzog, who is the foremost exponent of hypnosis and regression therapy and believes that present psychological problems can be traced to past life experiences. When Alan returns to his institute in Carmel, California after probing his own past lives in Moscow where he had gone to verify and improve his methodology, he meets up with Louisa Martin, a new patient who will put his method, and his life, to the test. Louisa's face is badly disfigured by a skin disorder that defies all conventional medical and psychiatric approaches. At the same time, another patient appears, this being the young, beautiful psychic Virginia Taylor, who is struggling with her own demons (in particular: the spirit of her dead twin sister) as she attempts to shed the gift that threatens her very existence. During Louisa's regression therapy, or transfers, Alan is propelled into the shadowy world of the occult and restless spirits influenced by Virginia, who also undergoes an exorcism, which leads to a colossal fight with the dead twin.
The plaintiff holds that in 2005 the book was submitted to a partner at Relativity Media, with an implicit understanding that her ideas were submitted to be used for a film. Eventually talks broke off.
When the movie was released, the plaintiff concluded that the director and writer of The Unborn had access and used a substantial amount of ideas contained in the novel, such as theme, plot, characters and sequence of events.
The plaintiff however does not allege copyright infringement, but rather a breach of an implied contract, seeking inter alia compensation for over $1 million.
Posted by Eleonora Rosati at 9:34 pm

There are few (if any) truly unique plot lines and that is especially so in 'fantasy' type genres. Lack of originality is exactly the reason for fantasies wide appeal . People love these things because they are such reliable and predictable entertainments.