Crown copyright and protection for the crown 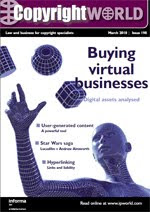 The March 2010 issue of Informa Law's Copyright World has now been published. It contains, among other things, a review by Navin Katyal (from public sector body Infrastructure Ontario) of the need to reform the Crown copyright provisions that still, perhaps somewhat anachronistically, linger under Canadian law. He argues that, while Crown copyright should not be undermined simply because Government has a regulatory role, consultation should lead to clearer guidance as to what should remain protected: prime source materials, such as legislative acts and government regulations, should be left to the public domain.
On the subject of crowns (as in "Jack fell down and broke his crown ...") here's also a summary by Simon Clark of Berwin Leighton Paisner which explains last December's Court of Appeal decision in the 'Star Wars helmet' case, Lucasfilm Ltd v Andrew Ainsworth and another.
The full contents of this issue can be seen here.
Posted by Jeremy at 10:57 am