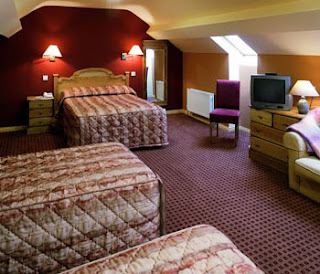 Via the eagle-eyed Gemma O'Farrell comes this news that the Irish High Court has asked the Court of Justice to give a preliminary ruling on legal issues raised in proceedings brought in an effort to have hotel operators pay a charge for playing copyright music in guest bedrooms. According to the Irish Times,

"The organisation which collects royalties for recording artists, Phonographic Performance Ireland Ltd (PPI), initiated an action last year against the State over its alleged refusal to amend a law which exempts hotels from having to pay copyright fees for music played in hotel bedrooms.

The PPI wants to charge €1 per bedroom per week. With around 50,000 hotel bedrooms nationwide, it estimates it is losing some €2.6 million annually. The PPI claims the Copyright and Related Rights Act 2000, which provides the disputed exemption, is contrary to EU law.

Section 97(1) of that Act provides there is no infringement of copyright where recorded music is heard “in part of the premises where sleeping accommodation is provided for the residents”.

Last October, the High Court directed that the issue of whether the State is in breach of its obligations under European law should be decided prior to any claim for damages.

Yesterday, in an interim ruling in the proceedings, Ms Justice Mary Finlay Geoghegan said she believed it was necessary to refer a number of questions in the case to the ECJ.

Among the issues the ECJ will have to decide is whether a hotel operator, as a result of providing TVs and radios in guestrooms, is a “user” of copyrighted music that can be played in a broadcast for the purposes of EU directive 2006/115/EC.

If the operator is such a user, the ECJ will then have to decide whether the same directive require the operator to pay a charge additional to royalties already being paid by TV and radio station operators.

The ECJ also has to decide whether hotel operators are exempt from such payments on grounds the playing of such music is for “private use” as provided for under the same directive.

A further issue is whether the directive permits the exemption of hotel operators from paying if the music is played by means other than TV or radio.

Ms Justice Finlay-Geoghegan said she would give the parties an opportunity to examine her interim judgment before making further orders and she adjourned the matter to next week".

This decision is not yet on this year's Irish High Court bit of BAILII. This is not the first time that copyright and hotel rooms have been considered by Europe's top court. In Case C-306/05 Sociedad General de Autores y Editores de España (SGAE) v Rafael Hoteles SA, the court ruled that,

"While the mere provision of physical facilities does not as such amount to communication within the meaning of Directive 2001/29/EC of the European Parliament and of the Council of 22 May 2001 on the harmonisation of copyright and related rights in the information society, the distribution of a signal by means of television sets by a hotel to customers staying in its rooms, whatever technique is used to transmit the signal, constitutes communication to the public within the meaning of Article 3(1) of that directive.

2. The private nature of hotel rooms does not preclude the communication of a work by means of television sets from constituting communication to the public within the meaning of Article 3(1) of Directive 2001/29".