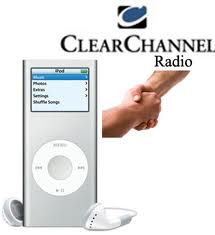 Clear Channel, the biggest radio company in the US with 850 stations, has entered into a landmark agreement with country music label Big Machine which will see the broadcaster pay a royalty for the use of sound recordings on terrestrial radio channels for the first time. In the UK these royalties are collected for the performance of sound recordings in all media by Phonographic Performance Limited (“PPL”) and whilst newer media in the USA such as satellite, internet and digital radio attract a royalty (currently collected by SoundExchange), US copyright law does not recognise any right to collect payments from terrestrial stations. Terrestrial broadcasters do though have to pay the “PRS” royalty for the use of songs (usually by way of blanket licences with ASCAP and BMI).

After pressure from the US Congress, a reluctant radio industry did start to negotiate a compromise with the record labels, but the talks collapsed. The broadcast lobby remains powerful in Washington although its clear some politicians are keen to introduce a system more favourable to record labels and recording artistes which would mirror the music publishing position.

Big Machine, headed Scott Borchetta, have seemingly been able to use the fact that a royalty does attach to internet communications of their sound recordings to lever Clear Channerl into making a payment for terrestrial uses too, although Billboard reports the deal is based on a share of advertising revenue across all of its radio output, rather than a ‘needletime’ or ‘per play’ royalty.

Speaking about the new deal at Billboard's Country Music Summit, John Hogan, CEO of Clear Channel's Media & Entertainment business said "We think its really important that with this new agreement that our business interests are aligned. When our interests are aligned, and when we have a very predictable, transparent business model, we are much more motivated to grow the digital business"

http://www.billboard.biz/bbbiz/industry/digital-and-mobile/clear-channel-s-john-hogan-discusses-big-1007241352.story
Posted by Ben at 11:52 am