In this, the fourth in her series of guest pieces for the 1709 Blog, Mira T. Sundara Rajan points to the protection of moral rights in India, a jurisdiction which has worked to combine respect for its rich and dynamic cultural heritage with its legal obligations. How has this vibrant and challenging country taken to moral rights? Mira explains: 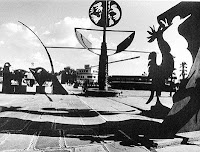 In an order issued on April 11, 2012, the High Court of Delhi ruled in favour of an Indian artist, Jatin Das, who brought a complaint against the Indian government for violating his moral rights. Mr Das, a 71-year old artist and sculptor, was described by High Court Justice Reva Khetrapal as “the face of Indian Art for more than five decades both in the country and abroad.” In 1995, the artist was invited by the Steel Authority of India to create a large-scale artwork for the industrial town of Bhilai. The realization of the work apparently required the efforts of 271 people, including engineers, “technicians,” and labourers. The sculpture, which the artist ultimately entitled, “Flight of Steel” (right) was, in the words of the Court, “ the largest steel sculpture ever built in India.” According to the Court, the work had attained the status of a “national treasure,” and “had over the years become a symbol of India’s Modern Art and Cultural Heritage.”

On March 2, 2012, sixteen years after the completion of his sculpture, Mr Das visited Bhilai and made some discoveries which, to him, were “horrif[ying].” The sculpture was no longer in place in Bhilai’s CEZ Square. It had been removed and was “lying disfigured and twisted” in the grounds of the City Zoo, coated in various colours of paint. The artist sued the Steel Authority, Bhilai Steel Plant, and the Government of India’s Ministry of Steel, for violating his moral right of integrity under section 57 of the Indian Copyright Act. He won.

For Indians, this case must create a strong sense of déjà vu. The facts in Jatin Das bear a striking resemblance to the earlier, seminal Delhi High Court litigation in Amar Nath Sehgal v Union of India 2005 (30) PTC 253 (this case was also handled by Pravin Anand and co-counsel of the Anand & Anand law firm, who represented Mr Jatin Das). There, too, an important sculpture described as an Indian national treasure had been damaged and, indeed, mutilated by negligent mishandling of the work.

Amar Nath Sehgal was not the first Indian case dealing with moral rights. Rather, the 1987 case of Mannu Bhandhari v Kala Vikas Pictures, AIR 1987 Delhi 13 (dealing with the rights of an author in a Bollywood film adaptation of her work) can rightfully make that claim. Mannu Bhandhari was the first case to establish the Indian judicial ideal of strong protection for authors and artists against powerful organizations. Sehgal developed this principle in a spectacular manner, and the judgment was a landmark ruling in two respects. First, Sehgal cemented the role of Indian judges as advocates for individual artists and, more generally, caretakers of Indian culture. Secondly, it established an approach to the legal interpretation of moral rights that is probably unique in the world.

India’s current provisions on moral rights are closely based on Article 6bis of the Berne Convention. In order to show that his moral right of integrity had been violated, Mr Das therefore had to establish that the mistreatment of his work amounted to a “distortion, mutilation, or modification” that would, in accordance with section 57 of the Indian Copyright Act (and Article 6bis of Berne), negatively affect his reputation or honour. Mr Das was easily able to show that he had built a significant reputation in India -- and, indeed, internationally -- and the Court concluded that “irreparable injury is likely to be caused to the reputation and professional standing of the plaintiff if the defendants are not restrained from causing further damage and mutilation to the plaintiff’s sculpture.”

As a fine point, it is difficult to see exactly how the Court envisioned the link between the mistreatment of the work and damage to the artist’s reputation. Indeed, the question of how evidence should be used to support moral rights claims, particularly in common-law jurisdictions, is a challenging one. In Jatin Das, the Court could have been relying, implicitly, on the Sehgal ruling, in the following sense. In Sehgal, the idea that destruction per se of an artwork does affect an author’s moral right of integrity was upheld, on the grounds that the existence and integrity of the overall creative corpus of the artist is the very foundation of his or her reputation (see Mira T. Sundara Rajan, “Moral Rights and the Protection of Cultural Heritage: Amar Nath Sehgal v Union of India, (2001) 10 (1) Int’l J. of Cultural Prop. 79, cited in the judgement). In this respect, the Sehgal court took a firm stance on an issue that has divided international copyright experts–whether destruction of an artwork qualifies as a violation of the artist’s moral right of integrity at all–and responded with a resounding “yes.”

But the Sehgal case advanced another legal principle of startling originality. To understand how this happened, it is necessary to look somewhat more closely at the facts in Sehgal. In that case, the damage to the sculpture occurred in 1979; the case only received a final judgment in 2005 ... twenty-six years later. In the meantime, however, the Delhi High Court was able to issue a temporary injunction which, in 1992, imposed an order on the Indian government to refrain from further mishandling of Mr Sehgal’s sculpture until the final disposition of his case. In 1994, the Indian government undertook to enact amendments to section 57 of the Copyright Act, ostensibly -- as observed by a drafter of the amendments, Mr.Jagdish Sagar -- in order to bring India’s provisions into exact conformity with the Berne Convention.

In the matter of Sehgal’s sculpture, however, the Delhi High Court did not concern itself with these legislative changes -- nor was it troubled by the evident intent of the Indian government to limit the protection of moral rights. Rather, Judge Jaspal Singh argued that, where outstanding works of art are concerned, the courts are under a special obligation to protect their integrity. Accordingly, the moral rights provisions in the Indian Copyright Act had to be read in the light of this imperative. In particular, Justice Singh argued that India had special obligations to cultural works that were derived from its membership in international conventions dealing with the protection of cultural property. He affirmed:

“[T]he various declarations by the international community in the conventions [ on cultural property] noted above, lift the moral rights in works of Art if the same acquire the status of cultural heritage of a nation. India is a signatory to the conventions and it would be the obligation of the State to honor its... declarations” ( Sehgal, para. 55).

According to Sehgal, moral rights are not limited to what is protected by the legislative language in the Copyright Act -- they are an expression of the larger principle of protecting valuable cultural heritage.

The most recent episode in the epic of Indian moral rights is an abrupt reversal of position.

On May 22, 2012, the Indian government passed the Copyright (Amendment) Bill 2012 -- legislation that is widely perceived as pro-artist. In particular, the Bill established a right to royalty payments for composers, lyricists, and musicians working in movies, by giving authors a copyright in their original work that cannot be assigned to producers as works-for-hire (see here and here; also, the description of the amendment process on the Spicy IP blog, here). This change has been widely lauded in India’s music and film communities, and, astonishingly, received “overwhelming” support from politicians across all parties (but see the critique here). Clearly, the plight of authors and artists has struck a strong chord in India, with Indian Minister of Human Resources Development, Kabil Sibal noting that the amendments should “most benefit those artists who were reduced to poverty in their old age.”

The quieter treatment of moral rights in the Bill is very much in consonance with a pro-artist approach. The Bill introduces moral rights for performers and, where authors in the traditional sense are concerned, the Bill partially retracts the previous round of amendments (1994), removing the specification that integrity violations must be committed during the copyright term. In effect, the possibility of perpetual protection for moral rights in India has been restored.

In promoting these changes, India may have embarked upon a lonely path. Its preoccupation with the status of individuals, and its concern with the livelihood and reputations of creators, seems curiously old-fashioned, and, of course, has been criticized as such.

But India is a somewhat different place. Authors’ rights, whether economic or moral, have profound resonance for Indian society. There can be little doubt that India’s strong affinity for authors’ rights is deeply-rooted in Indian culture -- veneration for the arts and for intellectual life in India has been a constant, not over centuries, but over millennia. India’s relationship with time is different from that of the West, and possibly, unique. In a culture where the age of the cosmos is traditionally measured in trillions of years, the events of the digital era occupy the briefest of moments. Will India defy trends -– or will it start them?

I have read your book and several of your articles where you have endorsed the need to have perpetuity in moral rights and have stressed on the merits of the pre 1994 law on the same in India. While this has been welcomed in the 2012 amendment to, Section 57, perpetuity seems to have been granted without having adequate safeguards in place. The case of Stephen Joyce asserting moral rights in James Joyce's work is not one that is unheard of. While in most other jurisdictions with exceptions such as France, Stephen Joyce's unreasonable claims would not be entertained, it seems like he could enforce all those claims in India. What in your opinion is the best way to remedy this obvious conflict?