From guest blogger Philippa Malas comes this thoughtful piece which the 1709 Blog commissioned on a fascinating development in the US: Philippa, who used to work within the art world at Sotheby's, is a persistant IP enthusiast who studied for the Bar course last year. 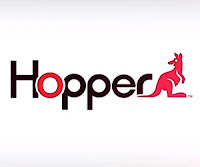 The major US television networks are potentially hopping mad at the release of a new digital video recorder (“DVR”). “The Hopper” was recently launched by the third largest satellite television provider in the States, DISH. Subscribers to Primetime Anytime can activate the Hopper to record the entire prime time broadcast schedule aired across NBC, ABC, CBS and Fox networks (the “Networks”). The Hopper also features “Auto Hop” which automatically skips the adverts of the stored prime time content during play back. DISH actively markets its product as “commercial free TV”. Ted Harbert, NBC Broadcasting Chairman referred to the device as “an attack on our ecosystem”.

DISH pre-empted objections to its product by filing suit in New York for declaratory relief, arguing that it had complied with its transmission licences and that copyright had not been infringed. Unsurprisingly, the Networks disagreed. Auto Hop allows the consumer to skip advertising during prime time periods which generate significant advertising revenue. NBC, CBS and Fox -- but not ABC -- (the “Networks”) filed suit in Los Angeles for copyright infringement with Fox also suing for breach of contract, in an action which has been stayed pending a motion to dismiss brought by DISH against CBS and NBC. A hearing date in New York is set for 2 July 2012.

The US Copyright Act confers an exclusive right on a copyright owner to reproduce, distribute and prepare derivative works which are based upon the works capable of attracting the right, § 106(1). The Networks contend that infringement has occurred under § 501, alleging (a) direct infringement and (b) secondary infringement through (i) inducement of infringement; (ii) contributory infringement; and (iii) vicarious infringement. It is worth identifying the substance of these objections, then considering the case in relation to EU provisions.

The Networks argue that the Hopper’s storage capacity (two terabytes or 2000 hours of video content) combined with the Primetime Anytime service means a user can create an on demand library which is copied to a device under the ongoing remote control of DISH. DISH is creating and distributing unauthorised copies of the Networks’ work which directly infringe their rights under §. 501. Note: it is the user and not DISH that is responsible for activating the service and therefore for creating the copy.

The Networks also claim that by providing the user with the Hopper and related features, DISH are promoting the use of its products for infringement and inducing infringement (§. 101). They claim that DISH targets known markets for infringement, namely consumers who wish to watch content without paying for permanent copies of ad-free works (via iTunes or Hulu.com). This draws parallels to terminology used in the US internet file-sharing case MGM Studios v Grokster. The Supreme Court found against Grokster, which had aimed to satisfy a known source of demand for copyright infringement. It would be difficult to draw the same conclusion in the instant case. DISH’s customers are likely to assume that the third largest US satellite TV provider had obtained the requisite broadcasting licenses and are therefore, dissimilar to the potential pirates a Grokster-type scenario might pre-suppose. In Grokster, the defendants were also found liable as the court established that they had not developed tools to diminish infringing acts and that they were gaining an economic benefit by selling advertising space on their site. DISH is gaining economic benefit and markets the Hopper to an audience as a way of avoiding the advertisements. It is not easy to determine whether infringement has occurred under this head.

Second, the Networks allege contributory infringement. The provision of DISH’s services and the Hopper facilitate and assist the user to infringe copyright. FOX’s pleadings allege that DISH has control over one of two storage elements in the Hopper and can monitor its users’ and prevent infringement but that it fails to do so. Success on this ground depends on whether DISH is aware that the users are infringing copyright. Its declaratory relief filing is evidence to the contrary. Even if the users are recording broadcasts, the activity could be exempt under fair use, as established in Sony v Universal City Studios 464 U.S. 417 (1984), and there would be no secondary infringement.

Finally, the Networks argue that DISH vicariously infringes their rights. As DISH has partial control over the Hopper, it has the power to control infringing conduct of its customers. Again, the difficulty here is that it is the customer (not an agent of DISH) which is creating the copy. Control is only recognized in cases which establish a recognised agency relationship. Since the user is not obliged to use the Hopper’s features, infringement is not an inevitable conclusion.

It seems that the Networks may have difficulty pursuing the infringement claims. Only Fox has filed for breach of contract. Fox also states that it is not taking issue with ‘traditional DVRs’, merely DISH’s particular product. From an EU perspective, that would be a wise path to adopt following the conclusions of the Court of Justice of the European Union (CJEU) in Airfield v Sabam C-431/09 and C-432/09 and more recently FAPL v QC Leisure C-403/08 and C429/08. In Airfield the court considered ‘communication to the public’ under the Satellite Broadcasting and Cable Retransmission Directive (93/83). It held that permission from a rights holder was required when a satellite provider intervenes in the communication from the original broadcaster, making works accessible to a public (‘new public’) wider than that conceived under the original authorisation. This is regardless of whether the programmes are already being broadcast by means reaching viewers directly. DISH counter that they obtained the relevant licences to permit the retransmission of the broadcast. In FAPL, the CJEU again examined ‘communication to the public’, concluding that it was not irrelevant that such a communication is of a profit-making nature [177]. DISH might also struggle with a defence under Article 5(1) Copyright Directive (2001/29). The copies stored on the Hopper are more substantial reproductions than those considered in ITV Broadcasting Ltd and others v TV Catch Up Ltd [2011] EWHC 1874 (Pat) (applying Infopaq)".

A katpat to Chris Torrero, for steering us to the initial link on IP Brief
Posted by Jeremy at 10:13 am

Why don’t CBS, FOX, and NBC exec want consumers to enjoy commercial-free TV? It’s what we want! I’m a customer and employee of Dish, and I think AutoHop is great because you can easily watch commercial-free TV. A well known consumer advocacy group, Public Knowledge, agrees that people should have the right to control how they watch TV. They’re taking a stand for consumers by creating a petition that tells CBS, FOX, and NBC media to keep their hands out of your living room and DVR. Sign their petition to keep control of how you watch TV http://bit.ly/KFdn1Q

I am unfamiliar with how television networks work. Do the networks have actual copyrights in these programs or do they only have broadcast rights in their final broadcasts?

@goldenrail. I can only speak definitively about UK law, but unless the network (more correctly the 'broadcaster') actually makes the arrangements to make the programme - ie is the producer or one of them - then it has no rights in the programme content copyright. Nor of course does it own the copyright in any adverts. Clearly it does own the rights in any links, trails or logos etc which form the cement between the programmes. So for instance taking a couple of UK TV programmes as examples, the BBC owns the copyright in Blue Peter, but ITV does not own the copyright in Downton Abbey.
The extent of any actual rights will normally be determined by the licence the broadcaster takes out when it 'buys' an independently made programme, for example how many times it may repeat the programme, or put it the iPlayer etc..