Hargreaves and Hooper speak out

Ian Hargreaves, author of last year's report on Intellectual Property and digital  growth in the UK, and Richard Hooper, ex Deputy Chairman of Ofcom and ex-Chair of the Radio Authority (and my MD at pan-European broadcaster SuperChannel way back in the 80s!) who is now in charge of the feasibility study for the for the Digital Copyright Exchange (DCE) proposed in Prof Hargreaves' Report, have been speaking to assorted representatives from the music industry at a 'First Monday' event on the 11th June in Central London.


Saying that the Digital Copyright Exchange was "the single most important thing" in his report, Hargreaves said that he was "very happy that work was already being done to make it a reality. I'll be less happy if it doesn't succeed! But while the government continues to support Richard, there is great potential".


Hooper in turn explained why he sees a need for the DCE, saying "It's our belief that our copyright licensing system, as a whole, is currently not fit for purpose" telling his audience "The music industry is actually better than many other creative sectors, but there is still room for improvement, and I think most people in the music industry would agree. There are various issues, but a key one is identification. It is critical that we make it easier for licensees to identify who owns what rights, and how they might go about licensing them. Now, many digital copyright exchanges already exist around the world and across the various creative industries, and especially in the music industry. But not everyone uses them, not everyone uses them correctly, and not everyone knows they exist. 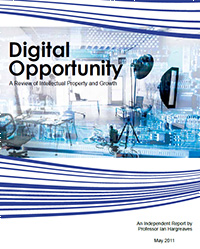 Both speakers seemed to accept that any DCE would need to be run on a voluntary basis with content owners 'opting in' to a database and licensing platform, although some commentators say that without compulsory membership (or a UK copyright registration system) the DCE would never really become effective as big players 'opt out'. But Hooper said "This process is about industry thinking" adding "these are not the government's issues that we are trying to address, they are your issues. And we have enjoyed a great response from the creative industries, especially the music industry. There is an appetite to make this work". Hooper also made the point that content owners had to face up to the reality of music and other content piracy saying "If you want politicians to do more to combat piracy" he said, "first you've got to take practical steps to eliminate the excuses used by those who routinely infringe" but made the important point that copyright law as it currently stands confuses many, is ignored and indeed is ridiculed by some, saying:


"For copyright to work, it needs to be brought in line with reasonable expectations" adding "We need mainstream public opinion on our side, and that means streamlining the licensing process, and removing those elements of copyright that most people consider a nonsense. Not being able to copy CDs for personal use is a nonsense. Not being able to make parody songs and post them on YouTube is, in my opinion, a nonsense. And the issue of orphan works, a nonsense. For copyright to work, for anti-piracy initiatives to work, the basic system needs to be credible. And these are the changes we are trying to make, to make your copyright system stronger".


But against this debate is the fact that a the DCE seems an already outdated concept in the age of a Worldwide web - it's a global business with global users ...... and one might ask the question of what use is a UK focussed copyright exchange?


Quotes from the CMU Daily (12th June 2012)  http://www.thecmuwebsite.com/  and an earlier  interview with Professor Hargreaves here and his A Review of Intellectual Property and Growth  Report here and Mr Hoopers 'phase one' report - Rights and Wrongs - is copyright licensing for the digital age? can be downloaded as a pdf file here


And congratulations to Ian Hargreaves, appointed a Commander of the British Empire (CBE) in the Queen's Birthday Honours on the 16th June.

Thanks for the update, Ben.
I'm largely in favour of the DCE concept, much for these reasons given by Ian Hargreaves. Clearly for it, ultimately, to be effective, it will need to be very widely publicised and understood by the general user (and abuser) of copyright works, not just the industry players.
As for you comment about the concept being outdated, I think the unilateral British approach is far preferable to an international (WIPO?) approach which would in my opinion become dominated by US commercial interests (cf ACTA) and not deliver the same ethos. Having read the stage one report by Richard Hooper, there's clearly a long way to go before a practical model will be avaialable, but let's hope that if the British approach is seen to work, then other countries could adopt a similiar model so that in time there can be a series of distributed databases across the globe providing a reasonably worldwide DCE. These could be allied to other projects such as ARROW, IMDB etc, and in time maybe to the series of orphan works databases which are proposed by the EU legislation.