Gangnam Style and the culture of free

One of this blog's most read posts is a post by Ben entitled "A good read on the culture of 'free'". Despite being repeatedly told that there is no such thing as a free lunch we all love a good freebie, and the culture of free is one which is growing. As copyright battles against the ravages of technology it is interesting to consider the attitude of the South Korean pop star Psy.
﻿

Psy released his Gangnam Style video on YouTube in July of this year and it is already the most viewed YouTube video of all time. According to the BBC the dance has been being performed by a Filipino prison inmates, the prominent Chinese artist Ai Weiwei, UN Secretary-General Ban Ki-moon and a Chinese robot. Gangnam Style won best video at this year's MTV Europe Music Awards, has been number one in 28 countries and holds the Guinness World Record for the most "liked" song ever.
In short, Psy has achieved, with Ganham Style, the success that every pop star dreams of. It is the most liked, the most viewed, the most purchased video in the world. Most pop stars would seek to fiercely protect that success, and the accompanying cash, using copyright.


Psy however has a very relaxed attitude to copyright, and famously waived his rights to GangnamStlye. This has enabled GangnamStyle parodies to be created and to spread virally, contributing at least in part to his success.
However this has not prevented Psy from making money from the song. According to an article by the Associated Press:


"With one song, 34-year-old Park Jae-sang - better known as PSY - is set to become a millionaire from YouTube ads and iTunes downloads, underlining a shift in how money is being made in the music business. An even bigger dollop of cash will come from TV commercials. From just those sources, PSY and his camp will rake in at least $8.1 million this year"
The easy conclusion that many have drawn from this is that it is possible to make money, indeed a lot of money, from music without relying on copyright; Psy being the perfect example. Indeed TechDirt has commented that:


"This is yet another great example of how artists can give away copies of their music and videos to build their reputations and then earn significant sums by selling associated scarcities -- in this case, appearances in TV commercials. Now, not every musician may want to take that route, but there are plenty of other ways of exploiting global successes like Gangnam Style -- none of which requires copyright to be enforced. "
The Associated Press article goes on to break down how Psy has made his millions:


1. YouTube
TubeMogul, a video ad buying platform, estimates that Psy and his agent YG Entertainment have raked in about $870,000 as their share of the revenue from ads that appear with YouTube videos.


Apparently Psy and YG Entertainment also earn money from views of videos that parody his songs. Google has detected 33,000 videos using Gangnam Style content. This latter point of course relies on Psy exercising his copyright in the song in order to extract revenue from parodies, which we are told he does not.
2. Legal downloads and CDs


The Associate Press article indicates that the song sells for $1.29 on Apple's iTunes Store, from which it extrapolates that Psy (and his agent, record label etc) could be due more than $2.6 million. The obvious question here is why Psy is due any money from downloads or CDs of Gangnam Style if he has chosen not to exercise his copyright in the song.
In South Korea downloads cost much less so Psy is likely to have made only around $61,000 from downloads in his home country, and he is likely to have made around $50,000 from sales of CDs in South Korea. Again, this is cash that must rely on copyright.


The AP article then says: "As for many other parts of Asia, illegal downloads and pirated CDS are so pervasive that only a small minority are willing to pay up for the legal versions." Again, if there is no copyright in the song surely there can be no illegal downloads?
3. TV Adverts


This is where the real money is: the AP article estimates that Psy's commercial deals amount to around $4.6 million this year (and notes that Psy is now the face of a new Samsung refrigerator and a major noodle company). This source of revenue is the one that does not rely on copyright in Gangnam Style as Psy is trading on his own image.
4. Psy's family


Apparently Psy's father, uncle and grandmother own 30% of DI Corp., a company which makes equipment that semiconductor companies use to make computer chips. 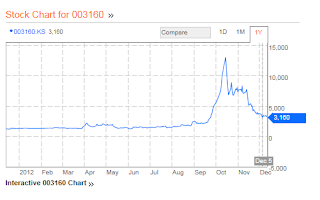 Believe it or not, in October of this year, when Gangnam Style was number one in more than 30 countries including Australia, Canada, France, Germany, Italy, Spain, and the United Kingdom, DI Corps' share price peaked (see the graph to the right). Although the share price has fallen since then it is still about double what it was before the release of Gangnam Style. Obviously not all pop stars' families own public companies so this probably isn't a viable replacement for copyright.
Of the above four points, revenue from TV adverts is the only one which most pop stars could rely on if they were truly not to assert any copyright in their works. They would be trading on their image and personality rather than their work. This would bring Psy's estimated earnings down from $8.1 million to $4.6 million.


It seems that by publicising an intent not to enforce copyright in his song Psy has bought a lot of public goodwill, however allowing parodies is different to not charging for downloads. Whilst in an ideal world music would be free and musicians would still earn money, Psy reminds us that there is no such thing as a free lunch.
Posted by Unknown at 8:55 pm

For me it seems that he did NOT waive his copyrights as a whole, rather he decided not to enforce his right to make adaptations, parodies.

On the other hand, he enjoys copyright protection in all other fields (YouTube plays, downloads, radio plays, etc.). So in the end this is more a pro-copyright story...

"The greatest challenge for an author [or other creator] is obscurity, not piracy."

Can't remember who said it (Cory Doctorow?) but it seems very applicable.

How could he waive copyrights he doesn't own?

He is the co-writer of the song. But does he own the copyright / the publishing rights?

And what about the recording? Does he own the rights to the master? Highly unlikely.

And who owns the rights to the video? Psy or YG Entertainment / Universal Repulic / UMG / Vivendi?

From my understanding, it sounds like Psy and his team had a "Creative Commons attitude". If you look at the CC BY-NC-SA 3.0 licence (http://creativecommons.org/licenses/by-nc-sa/3.0/deed.en), this looks exactly the way they behaved.

Psy, his cowriter and his label, are not waiving copyright. They are simply declining to enforce it on YouTube. They are still collecting adview revenues from various sites, including YouTube, in the fairly normal way, getting paid for iTunes downloads, and physical sales.

Another significant source of income for Psy and his new management group is also the huge number of live gigs he has landed because of this. Much easier than touring, because he only does a short eprformance.