Last year, the 1709 Blog posted twelve vignettes of worthy souls who, having died in the course of 1941, fell out of copyright in 2012 in the large number of jurisdictions in which the copyright term for authors' works is life (i.e. death) plus seventy years. This year guest contributor Miriam Levenson kindly provides us with a further twelve creative personalities, starting with Stefan Zweig:

Although he considered himself a patriot, Austrian-born Stefan Zweig was an ardent pacifist who believed in the establishment of a unified Europe. Rather than bear a rifle during the First World War, Zweig spent most of the war years in Switzerland, where he shut himself away from politics and concentrated on his writing. His novellas, novels and biographies brought him a great deal of popularity during the 1920s and 1930s, and Zweig enjoyed close association with many great names of the day – such as Arthur Schnitzler, Theodore Herzl, Richard Strauss and Sigmund Freud. Strauss in particular greatly valued his collaboration with Stefan Zweig, and continued to ask the writer to provide libretti for his operas even after Zweig’s works were banned by the Nazis. After receiving threatening letters from the Gestapo warning Strauss to sever ties with Zweig, Strauss resigned as president of the Reichsmusikkammer (the Nazi State Institute for Music). Describing himself as a Jew purely by ‘accident of birth’, Zweig decided to flee Austria soon after this episode. He found refuge first in England, and then in the USA and Brazil. As the Second World War progressed, Zweig grew increasingly depressed by the intolerance of humanity and the spread of authoritarianism. In February 1942 he wrote a note detailing his feelings of hopelessness and desperation, and took an overdose. 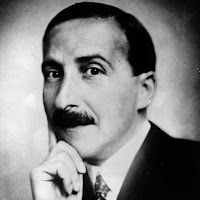 Zweig’s most notable work is his autobiography, The World of Yesterday, which analyses society during the dying days of the Austro-Hungarian Empire, and provides colourful descriptions of various high-profile personalities of the time. Zweig also had a passion for collecting literary and musical manuscripts, and some of his collections are currently on display in the British Library. While Zweig’s oeuvre was never embraced by the British public, his works remain popular in Europe and America today.

His novel "Beware of Pity" is a brilliant piece of writing, highly recommended: http://www.pushkinpress.com/books/authors/stefan-zweig/beware-of-pity