The second in this year's series by Miriam Levenson on authors and creators who died in 1942, and whose works fall into the public domain in countries which protect copyright for life plus 70 years, introduces a writer and personality who is little known in the West, Akiko Yosano. 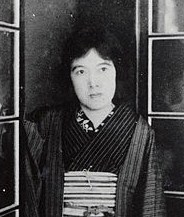 Akiko Yosano left a remarkable legacy. In her 63 years, the Japanese poet wrote around 40,000 poems, 11 books of prose, and was the mother of 13 children. Her first volume of poetry, Midaregami (‘Tangled Hair’), was published in 1901 and fiercely denounced by literary critics. Nevertheless, it was widely read and brought Akiko tremendous popularity with the free-thinkers of her time. Yosano’s favoured genre of poetry was the traditional five-lined tanka. Although she tended to write in old, classical Japanese, the content of Akiko’s poetry was uninhibited in its sensual evocation of love and passion. Amongst Akiko’s most controversial poems was Kimi shinitamou koto nakare (‘Thou Shalt Not Die’), written for her younger brother during the Russo-Japanese war of 1904-5. This poem was turned into a song, and used as an anti-war anthem during the long and violent siege of Port Arthur.

During the Taishō period (1912-1926), a time of increased democracy in Japan, Akiko’s poetry began to promote her feminist philosophy, and her criticism of the growing militarist culture. Her autobiography Akarumi e (‘To the Light’) was published during this period, alongside famous poetry anthologies such as Hito oyobi Onna to shite (‘As a Human and as a Woman’). Akiko was extraordinarily prolific, and was capable of producing as many as 50 poems in one sitting.

Akiko’s husband, Tekkan Yosano, was also a poet. While Tekkan was responsible for introducing the young Akiko to tanka poetry, his reputation was soon eclipsed by his prodigious pupil. Tekkan remained supportive of his wife’s literary career, and continued to publish her poetry. In addition to her output of poems, Akiko was a strong proponent of women’s education and founded a school for girls. She also translated a number of Japanese classics into the modern Japanese language".