Faik Konica is the first Albanian to feature in any 1709 Blog review of authors and creators whose works are falling into the public domain in the coming year. This note is brought to blog readers by guest writer Miriam Levenson. 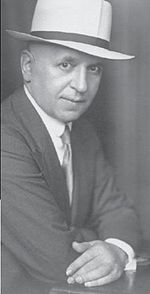 By the age of 22, Albanian Faik Konica had been educated in four different countries and was fluent in seven languages. His first-hand knowledge and experience of different countries allowed him to be a strong proponent of Western culture in Albania, while spreading awareness of Albanian culture across Europe. Konica produced the periodical Albania, which was published in Brussels and Paris during the years 1896-1910. In the very first issue, Konica published an article entitled "On the Foundation of an Albanian Literary Language", in which he emphasised the need to fuse the two main Albanian dialects, Tosk and Gheg, in order to create a unified literary language. Konica was one of the first to edit the texts of early Albanian literature, and the fluidity of his writing style was a major influence in the refinement of Tosk prose. Decades later, this formed the basis of the modern Albanian literary language. During his years living in Brussels and London in the early 20th century, Konica wrote and published under the pseudonym Thrank Spirobeg.

Konica was often scathing and heavily sarcastic in his articles about the backwardness of Albanian culture, but his passion for change was rooted in a love for his country’s traditions and ancient texts.

His legacy, in the words of French poet Guillaume Apollinaure, was to have ‘turned a rough idiom of sailor’s inns into a beautiful, rich and supple language’.