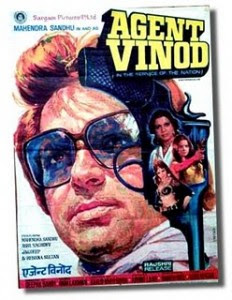 My new favourite copyright read, the Hindustan Times, reports that just as the song Pungi Bajaa Kar from Saif Ali Khan's soon to be released spy thriller, the re-make of Agent Vinod, is gaining popularity, an Iranian band has slapped a legal notice on music director Pritam Chakraborty and the film’s distributors for alleged copyright violation. The band, Barobax Corp. was founded in 2003 by three Iranian nationals Kashayar Haghgoo, Kevian Haghgoo and Hamid Farouzmand and claim that they had already released the song as a track on their 2010 album Soosan Khanoom saying “On March 12 this year, the band came across the promotions of the movie Agent Vinod on satellite television in Iran. The song Pungi Baja De was being aired. On listening to the song, the band realised that the initial portion of the song is lifted without any change from the title song of their album" further stating "We demand the music director, producers and directors to refrain from releasing the song in the movie or use it to promote the movie. Failing to do so, the band shall be compelled to initiate proceedings to seek a restraining order and necessary compensation".

According to the notice, the band is the owner of the copyright of the song and recording Soosan Khanoom which was registered under the Copyright Act in Canada on June 30 2011. Alongside Pritam, the notice has also been served to Eros International Media, Illuminati Films Private Ltd and Super Cassettes Ltd. The movie is due for release on March 23rd.

http://www.hindustantimes.com/Entertainment/Bollywood/Agent-Vinod-s-Pungi-song-a-copy/Article1-827520.aspx
Posted by Ben at 11:15 am

Since Iran is not a signatory to the Berne Conventiuon, the UCC or TRIPs, and as far as I can ascertain has no bilateral copyright treay with India, it will be interesting to see how far this gets. Although Iran has signed up to the Phonograms Convention this would only apply if the soundtrack of the film had used Barobax's actual recording, whereas it appears that the allegation relates to a lifting of some of the music and / or lyrics of the Barobax song. Also I'm not clear what if any bearing the Canadian registration has on the matter, as it appears the band are based in Iran, unless of course the album was recorded in Canada. Iranian details on WIPO database here: WIPO

I doubt if their claim is legitimate. The 10 seconds of music in the beginning (and apparently, another "little portion" ) , that they claim was composed by them, has been pretty common in Indian music for decades.

It's possible that the Bollywood film producers paid the band members to create a controversy for publicity... :P

The last post was prophetic as the Times of India now reports Iranian band Barobax has now apologised to Pritam for the copying charge levelled against the music director. Still, all good publicity!

The band said in a statement "We decided to withdraw the case filed against Pritam for copying a song of Barobax. After the analysis made by experts, we realized that Pritam is right and there is no copying. We understood that we cannot build a good case. We do not want to get into any further legal hassles and so, are withdrawing the case as we know Pritam's lawyer, Henal Vakharia, is an expert in copyright laws. Moreover, there might be criminal charges levelled against us. We sincerely apologize to the composer and withdraw all our allegations."

Karthik S, who heads a site that chronicles plagiarism in the Indian film industry, said, "I am happy that Pritam has got justice. The band must have understood that there was no case that could have been made against Pritam. They were perhaps swayed by the past history of Pritam. That is very wrong. One should judge each case on an individual basis. In the history of film music in India, such a case has never happened. Though I have always pointed at Pritam's other influences in the past, I knew that he was right as far as the "Pungi" song is concerned. Tunewise (or genre-wise) both the songs are similar to other songs like "Hawa hawa" by Hassan Jehangir but owe their origins to the '70s Iranian song, "Havar havar", by Kourosh Yaghmai and Viju Shah's song from "Aar Ya Paar" called "Tamma ele". There was no basis for alleging that Pritam copied the Barobax song since the tunes are completely different and rhythm similarities could be tracked back or explained to commercial loops. I am happy that truth has prevailed."