Lisa Michael, a North Carolina professional photographer, filed a complaint on July 21 against Harley-Davidson and three of its dealers, alleging that their use of one of her photographs in an advertising brochure had not been authorized and thus infringed her copyright. The case is Michael v. Harley-Davidson, Inc. et al, 5:2015cv00346.
In September 2014, Plaintiff took a picture of a man sitting on a Harley-Davidson motorcycle and licensed it to a local Harley Davidson dealer, for limited use only in online advertising. The photographer included a digital watermark on the photograph to indicate that the picture came from her personal website. 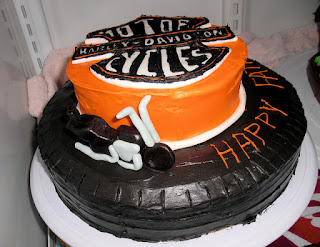 Plaintiff later discovered that this photograph had been used as part of an “Iron Elite” advertising campaign, celebrating African-American Harley-Davidson riders. Plaintiff applied to register the copyright with the Copyright Office on July 6 before filing her suit in the Eastern District of North Carolina. The original licensee of the photograph has not been named as defendant to the suit.
Plaintiff claims that Harley-Davidson and several Harley-Davidson dealers are jointly and severally liable for damages, and she is demanding a jury trial.
The complaint alleges that Harley-Davidson created the “Iron Elite” campaign and offered a fabric patch featuring the silhouette of the rider in the original photograph. The silhouette was drawn in black and white over a black background surrounded by orange, using thus the colors of the Harley-Davidson trademark. The”Iron Elite” site explained that the patch had been created as a “special, limited edition” to pay tribute to famous African-American Harley-Davison users, and informed the public that it could be obtained at several Harley Davidson locations, which are the other Defendants to this suit.
Neither the online campaign site, nor the patch, indicated that Plaintiff was the author of the original work used to create the patch. This article states that Plaintiff had posted to her followers on Twitter that “My image chosen to represent HARLEY DAVIDSON USA IRONELITE 2015! © lisamichael.com", but that the tweet was later deleted. I could not verify this information, as Plaintiff’s Twitter account is now private.
The photographer filed a copyright infringement suit, and also claimed that the unauthorized use of her photograph amounts to false designation of origin and unfair and deceptive trade practices. The Complaint states that Plaintiff’s “label,” that is, the digital watermark on the photograph, “identified Plaintiff as the source of that work” and that removing it constitutes unfair and deceptive trade practice and false designation of origin.
This is an attempt to use trademark law to palliate the absence of moral rights in U.S. law. However, the court is likely to consider the patch to be reverse passing off, which is the misrepresentation of someone else’s goods or service as one’s own. In 2003, the U.S. Supreme Court held in Dastar that the phrase “origin of goods” in Section 43(a) of the Lanham Act “refers to the producer of the tangible goods that are offered for sale, and not the author of any idea, concept, or communication embodied in those goods” and thus closed the door to litigants wishing to use the Lanham Act as a way to protect their right to attribution.
The complaint alleges that the campaign featuring the infringing photograph has been reproduced and distributed on social media by third parties, but, unlike this recent case, Plaintiff did not attempt to sue these social media users for contributory infringement.
[Here is a video of Brigitte Bardot singing Je ne reconnais plus personne en Harley-Davidson, a song written by Serge Gainsbourg.


Image is courtesy of Flickr user lePhotography user under a CC BY-NC-ND 2.0 licence.
Posted by Marie-Andree Weiss at 1:53 pm

A pretty big mess-up from the side of Harley Davidson I would say.